Pilsen photographer Aurelio Barrios and his piece of Chicago history

By Elias Cepeda
Extra News
CHICAGO — First he brings out boxes. Dozens of them, each with hundreds of black and white photos. Next come the framed large pieces, date-stamped, bright and each with at least two accompanying stories.

Photographer Aurelio Barrios is showing EXTRA around his storage facility, taking us through some of his favorite photos taken by his father Adalberto. Many that we view today are over sixty years old. 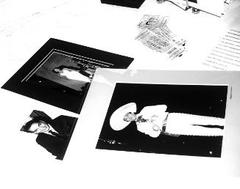 There’s the photo of Mexican comic king Cantinflas getting off a plane in Chicago to promote the film, Around the world in 80 days and then there’s more personal ones of him just hanging out, posing for the elder Barrios. There are the many of the most famous Mexican actor ever, Pedro Infante laughing and socializing.

Aurelio says that though his father owned a photo studio, he also earned the trust of celebrities and power brokers by venturing outside of his studio almost every night to shoot social events, year after year. “He worked hard and was an innovator,” the son remembers.

Adalberto would take shots at an event and then touch back with those who were at the event, offering them photos at a certain price. Soon, though, he came up with a time-saving idea that allowed him to do better business.

“If he was at an event at the Palmer House or some other place like that, he’d rent a room, set it up as a dark room and have an assistant work that room. Then he’d go downstairs to the ballroom, shoot, take them up …