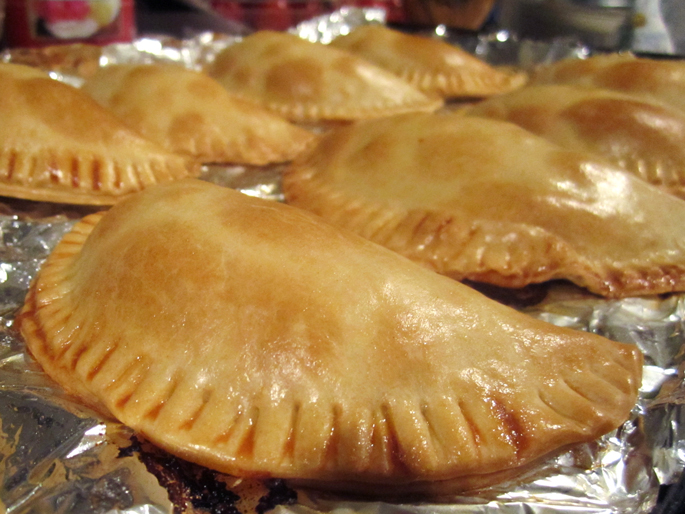 Who would have thought that the delicious Latin American – okay, and Spanish too! – turnovers, better known as empanadas, filled with meat, seafood, vegetables, cheeses and a never-ending list of ingredientes could be reinvented?

And I am not talking about changing the frying or baking of this popular Latino street food or modifying its typical half moon-shape, but rather resolving the bothersome edge-pinching, needed after folding over and forming a semicircle, so our tasty filling cannot escape from the stuffed corner of the dough.

This very last part has found a permanent fix with a new invention called the Empanada Fork, a pastry press with a Latino twist invented by Hipatia López, the proud daughter of Ecuadorian parents, who was born and raised in New Jersey.

López proudly traces the roots of her career as an inventor to a simple beginning – her family cocina. She’s fueled by simplifying one of the most traditional recipes with a single tool. At the end of the day, she is building a smarter kitchen.

Latina Lista talked to López about her invention – a challenge, but also an extraordinary opportunity.

LL: How did you come up with the idea of the empanada fork?
HL: It occurred to me one day during the holiday season when in my household we were preparing the menu. We did 100 empanadas and my husband is the cook in our family, so he prepared the fillings. I had to close them and even got my kids to help me.

This last step takes so long and my thumb started to hurt, a bit frustrating. I just blurted it out loud: “Someone needs to invent a utensil so this can go faster.” I just kept thinking of it over and over in my head – I should do it!

Keeping it a secret though from family and friends was very hard but I did it.

I really thought it had to exist somewhere so this is why I held on to the idea for a year until I decided to go through with it and contact a lawyer about the patent process.

LL: How was the patent process?
HL: Honestly, in the beginning I called any lawyer not realizing they specialize in just that and are called patent attorneys. I eventually started to research some in my local area and called three. I always go with my gut instinct when choosing who is least expensive, etc.

It took one year to patent. I actually now have two patents on my utensil, both designed a little differently because I just wanted to cover myself.

LL: What about those people that said no to your idea?
HL: I got many no’s and got hung up on once. At first, it hurt a bit but when it happened more often, it did not even phase me. I realized after the first rejection, I was okay.

Since I did think of the “idea” a whole year before I did anything about it, I started to research online just looking for the item everywhere. I went to stores, bodegas, etc and could not find it. That is when I just convinced myself that I CAN do this.

LL: Your product has made it to QVC. What is next for you?
HL: I am currently working on trying to be a local vendor for Walmart in my area. I will be available for sale real soon off another Internet site called uncommongoods.com

LL: Are you developing your brand full time?
HL: I do still have another professional duty besides Empanada Fork. I eventually would love to do it full time and possibly have someone I could work with to start building my brand.

LL: Any other invention coming up soon?
HL: My mind is always thinking of the next invention. However, people have to realize this is costly because of lawyer fees, molds, etc. I have thought about a new invention but waiting to get Empanada Fork off the ground, so I can devote time to this new idea.

LL: How is a regular day in your life?
HL: I am quite busy. I work four days a week at my accounting job. I have three kids so I am all over the place with them for sports and school. I do have a schedule which is important for me to make sure I do get things done that need be. Of course inevitably there are days that nothing goes as planned and I am ok with that too.

LL: Any role models?
HL: Easy question for me: My mother. I look up to her so much because she came to the United States leaving all her family behind. She is 1 of 9 and the only one here in the U.S. She spoke no English and somehow for as long as I remember had two or more jobs. She always pushed us, even though as a teenager, I did not understand it, now as an adult, I get it. She is definitely a superhero in my eyes.

LL: What is your motto?
HL: Live life to the fullest and appreciate the things you have and not what you don’t have.

LL: And of course, what is your favorite empanada filling?
HL: I love most of them but chicken is my favorite!