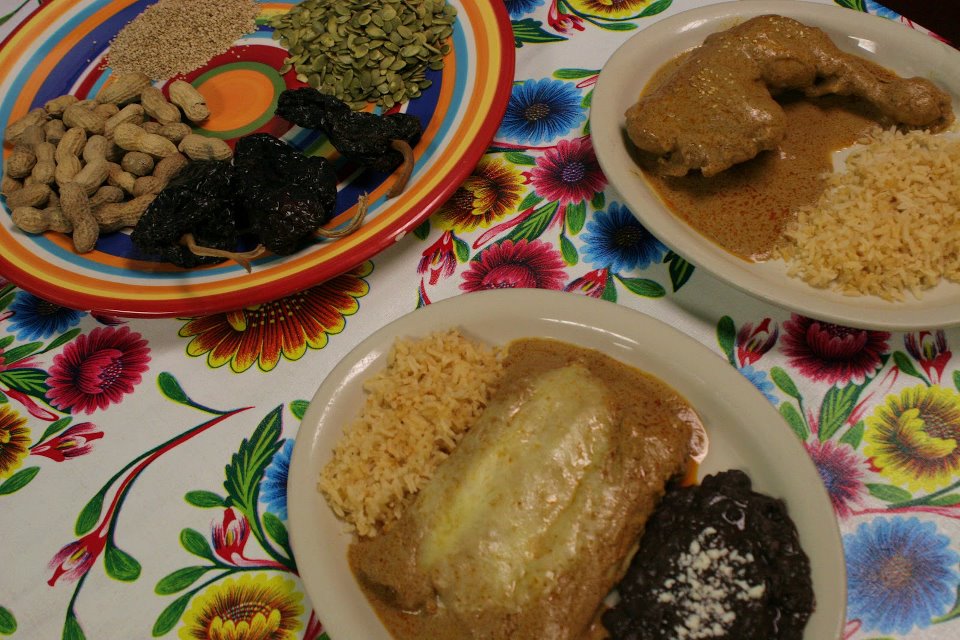 There are few countries in the world where on one day the entire population gathers to enjoy a feast that is essentially uniform throughout. In the United States, this curious event has been happening for four centuries, and without a doubt Thanksgiving is the perfect excuse to enjoy delicious food and huge servings without feeling guilty.

Reinventing the taste
Emmanuel Montes, originally from Tamaulipas, Mexico, has been constantly reinventing his family´s Thanksgiving dinner, building it around tamales, whether they are cooked in banana leaves or cornhusks.

“The tamale is the main attraction on the plate; no doubt it is what represents us,” says the Chef, who prepared a sampling of his cuisine in Tulsa, OK. “The custom is that it be a pork-filled tamale, whose flavor is heightened because of the banana leaf,” says Montes. “It can be served with a green sauce. The color comes from the poblano chili, which provides just the taste, but not spiciness; the consistency is achieved with white fresco cheese and sour cream.”

Those who prefer the chicken tamale can eat it with Montes´ secret ingredient: pipián sauce, a tasty blend of pumpkin, sunflower or sesame seeds and peanuts. His version is not the traditional red or green sauce, but a blend of both, between spicy and sweet.

“It is not conventional; it is a blend of flavor and regions. It has something from Veracruz (Mexico),” said Montes, while he suggested dipping a bit of turkey in that sauce. “That way we go from predictable turkey to a very authentic one, one that is very us.”

This version of the pipián sauce is far from being the Cinderella of Aztec cuisine.

“It is not well known, but I don’t hesitate in stating that it is the best one,” said Montes. “It brings out the flavor of the dish in which it is used. It is unique. And, please, let’s be clear, this is not the mole of the Huastecos; it is simply a wonderful creamy sauce; it is pipián and that’s all.”

The second round of dishes chosen by Montes to be drenched in the pipián sauce included a large chicken leg and a large serving of enchiladas. These were served with rice and black beans, which were sprinkled with white cheese.

“The freshness of the pipián sauce is the key to success,” he said. “It is also a great alternative for vegetarian dishes, since it is a sauce that is so juicy and with so much flavor that it stands out.”

And of course, there is no dinner without dessert, which is why Montes presented one of his specialties: Chocoflan, a spongy dark chocolate cake with a thick covering of caramelized flan or custard.

“Preparing this dessert is like doing magic,” he said. “The mix of ingredients are so different that many people do not expect that the result will be something that you just can´t stop eating.”

La Salsa
Hispanic cuisine sustains itself through sauces, which serve as multicolored coatings with such particular flavors that they are dishes in and of themselves. They are so versatile they are the perfect and irresistible accompaniment for meat, poultry or vegetables. In a few words, salsa is the perfect Latino twist for Thanksgiving.

Francisco González, a Mexican cook, said he has perfected the best sauce for a birria, a sort of stew. Another option for Thanskgiving, he said while smiling. He put it to the test at his mobile restaurant, usually parked in West Tulsa.

“Few people like to give out their recipe to accompany the birria,” he said. “But it is worth it, so that others may enjoy it.”

Birria is a dish made with mutton, lamb or goat, but it stands out due to the sauce that accompanies it. “Although birria is complicated, anyone can make it. But when it comes to the salsa, that’s something else,” González said, while checking the ingredients for his top-notch sauce.

The base of the sauce is made up of tomatoes, tomatillos (the Mexican green tomato), chile de árbol, jalapeños, vinegar, chile ancho, chile serrano, ground cloves, cumin, oregano, black pepper, onion, garlic and salt to taste.

“The important thing is the balancing and the amount of ingredients,” said González. “If we go overboard with any of them, then that is all we will taste in the sauce.”

González put the ingredients in a pot of boiling water for 15 minutes. “Then it is blended, although the original method is using a molcajete” he said. “That’s all. The only thing that is missing is the birria.”

A wise adage reminds us that “there is no better sauce than a good appetite.” However, the pipián sauce and the sauce for the birria might be an exception.

An ancestral bridge
For Emiliano Gutiérrez, a native of Sonora, Mexico, tamales are more than a menu item. In fact, he defines them as a “bridge that connects our traditions with something new to Hispanics, which is what Thanksgiving Day is.”

“The best thing about tamales is that by themselves, they are a complete meals, more so if accompanied by the traditional turkey,” Gutiérrez said while in his restaurant in East Tulsa.

“Thus we have the best of two cultures.”

Some historians affirmed that the very first Thanksgiving was celebrated in 1621; however, for these three Tulsan cooks, each year is the first one. They just enjoy and reinvent a classic Turkey dinner with a tasty Latino twist.