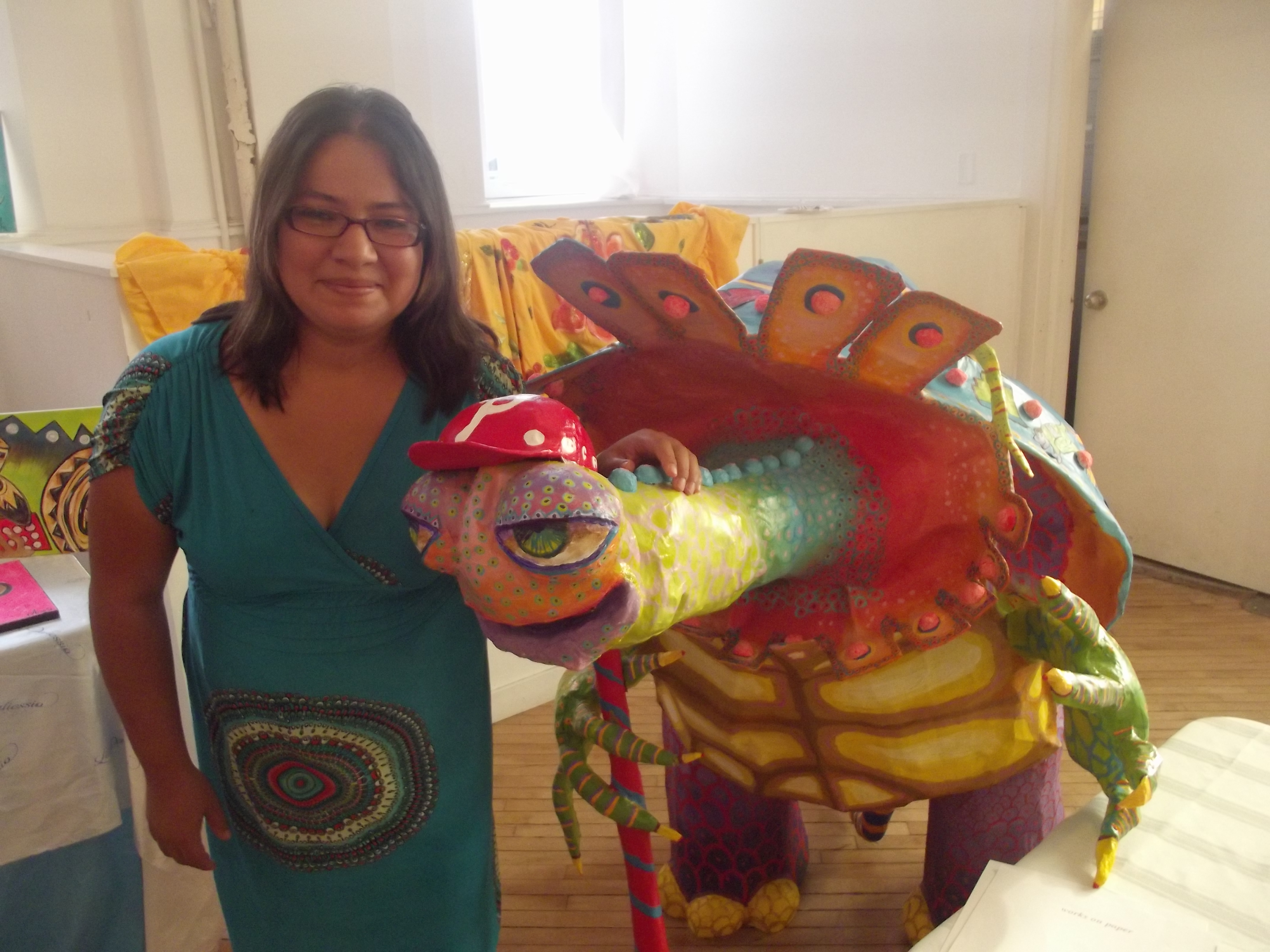 Philadelphia – An extensive exhibition of the works of more than twenty emerging Latina artists was offered by Raices Culturales, Friday, at 1417 N. 2nd street, the spacious Crane Arts Building headquarters of Raices.

A showcase of an eclectic selection of paintings, photographs, sculptures and textile weavings from artists who are either recent immigrants or influenced by their Latino heritage, the collective works were, at best, an illustration of Mexican Muralist Jose Orozco’s belief in the “glorification of the indigenous’ culture and folklore.

A pair of Guatemalan Weavers, Angelica Lopez and Orlandina Hernandez dexterously wove their ornately festooned tapestries, as a cluster of women watched with admiration the exquisite craftsmanship that our Central American neighbors preserved, the same way other cultures preserve wines and classic arts.

Although the pieces can often take more than a week to complete, Ms. Lopez offered to sell one 6’ by 5’ garment for $50.00.

Inside the central room at the Crane Arts, a line of diverse photographs revealed the premiere works of a group of Latinas, most of them recognized professionals with careers as heads of community organizations, teachers and social workers.

In her Regaldo de Vida,” Dalia O’Groman captured the face of her nephew, Axel Armenta of Guanajuato, Mexico, gazing in fascination at a caterpillar on his arm. The photo exudes a sort of delight and exuberance that one feels in discovering something novel.

Carmen Marcet’s Brazos Al Sol is a sort of landscape piece that ruminates languorously over the fading light around the leafless branches of a tree.

In this traditional Mexican art, Ms. Palma has taken the gruesome and gloomy topic of of our inevitable demise and by adroitly molding her figurines, has conveyed a decidedly comical and grinning retort to the grim reaper. A disciple of another Mexican-born artist, Cesar Viveros, Ms. Palma’s talent has earned her showings at the Philadelphia Museum of Art and University of Penn Museum.

Already among the virtuoso Muralists in the city of Philadelphia, Mr. Viveros has been engaged to paint a three-story mural on the southern wall of the Crane Arts bldg., a few yards from the historic Iglesia de San Miguel.

Aligning her works in the foyer of the Crane Arts, novice painter Sonia Delgado says she turned to painting for therapeutic reasons, and found an irresistible passion. “I’m obsessed,” she said laughing.

Beginning with a heavily lacquered blue piece, Ms. Delgado’s works have advanced to an array of remarkably polished and colorful paintings and decorative tablets that are picturesque, nearly surrealistic, reflective and allegorical.

Both former Exec. Director Yolanda Alcorta -now based in Washington, and the current Director Mary Rivera introduced the group of artists.

James Smith is a reporter for El Hispano in Philadelphia, where this story originally appeared.