By Vanessa Pérez Rosario, Ph.D.
Latina Lista
USA — On July 5, 1953, in the early morning hours, two New York City police officers spotted a woman lying in the street near the corner of Fifth Avenue and 106 Street in East Harlem.

She died shortly after in Harlem Hospital of pneumonia. Because she had no identification on her, she was buried in Potter’s Field in New York City. That woman was later identified as award-winning Puerto Rican poet, Julia de Burgos. Family and friends had her body exhumed and repatriated. 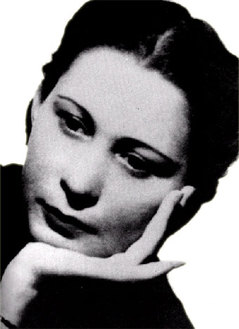 Julia Constanza Burgos García was born on February 17, 1914 in the town of Carolina the eldest of thirteen children. Although her family’s poverty made it difficult for her to attend college, she persevered and graduated from the University of Puerto Rico with a two-year teaching certification in 1933.

She participated actively in both the feminist and nationalist movements on the island at the time. She worked as a teacher and journalist and published her poetry in local literary magazines.

Her first collection of poetry Poema en veinte surcos (Poem in twenty furrows) published in 1938 explores themes of social justice and women’s rights. Included in this collection is one of her most well-known poems”Río Grande de Loíza” where she praises the landscape of the Island while remembering the legacy of conquest and slavery that marks Puerto Rico.

Canción de la verdad sencilla (Song of the Simple Truth), her second collection, published in 1939 won the Literary Prize from the Ateneo Puertorriqueño, the leading Puerto Rican cultural institution at the time.

On January 18, 1940, Julia de Burgos embarked on a journey to New York with no plans to return. She was twenty-five and an aspiring writer. She had been married and divorced.

“I want to be universal,” she exclaimed in a letter to her sister shortly after her arrival in New York. Six months after arriving, she moved to Cuba where she lived until 1942. She then returned to New York, but struggled to make a living as a writer because of racial, ethnic and linguistic discrimination.

She published her work in local Spanish-language newspapers, and worked as as editor of Pueblos Hispanos a New York-based newspaper that promoted many progressive social and political causes including Puerto Rican independence.

She was once again awarded the Literary Prize by the Ateneo Puertorriqueño in 1946 for her essay “Ser o no ser es la divisa” (“To Be or Not To Be Is the Motto”) where she advocates for Puerto Rican independence.

Her final collection of poetry El mar y tú (The Sea and You) contains poems that she wrote while in Cuba and New York and was published posthumously in 1954.

De Burgos was an ambitious and brilliant woman who worked diligently on two fronts — to establish herself as a writer of international acclaim and to eradicate injustice. Her feminist politics and her Afro-Antillean ideas allow us to read her as a precursor to contemporary U.S. Latina/o writers.

While it is rare for a poet to become a cultural icon, Julia de Burgos has evoked feelings of bonding and identification in Puerto Ricans and Latina/os in the United States for over half a century. She emerges as part of the tradition of resistance on the Island, and a champion for civil rights in the States.

Vanessa Perez Rosario is a professor of Latino Studies at The City University of New York, Brooklyn College. She also edited Hispanic Caribbean Literature of Migration: Narratives of Displacement, a collection of essays exploring the literary tradition of Caribbean Latino literature written in the U.S. beginning with José Martí and concluding with 2008 Pulitzer Prize winning novelist, Junot Díaz. Follow her on Twitter @VanessaYPerez