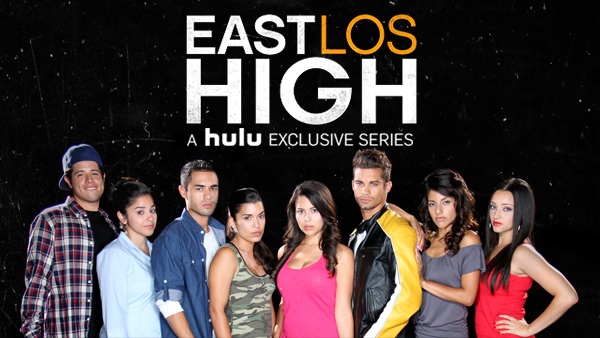 LatinaLista — The saying “when a door closes, somewhere a window opens” could be used to describe what some Latino filmmakers are doing in Hollywood these days. Rather than accept rejection from the major studios and networks who aren’t interested in carrying programs that appeal to Latino audiences, Latino filmmakers are creating their own windows of opportunity by bypassing the traditional route to Hollywood success and going directly to the masses by creating web series.

Web series are giving more Latino film talent access to audiences like never before. The latest web series to debut online, and this time on a major online video delivery service, is East Los High.

“East Los High” debuted this week exclusively on Hulu. It’s the online network’s first English-language show with an all-Latino cast. The series’ co-creator/producer and director is veteran Hollywood filmmaker Carlos Portugal, a Cuban-American, Miami transplant who these days is a resident of East LA where the series is set.

The series revolves around a teenage love triangle where two cousins, of completely different personalities and backgrounds, are in love with the same chulo football player. Of course, such conflict is going to create high drama — the perfect recipe for an ongoing series.

In an interview with Latin Heat, Portugal reveals that the series has been a labor of love he’s been working on for the past three years. Yet, unlike most of his peers, who have to bootstrap their own productions, Portugal received funding from an unlikely source.

I was approached by a wonderful non-profit organization, Population Media Center (PMC). They were interviewing writers for a program they wanted to produce which addressed awareness and prevention of the high rate of teen pregnancy among Latinas in the U.S. We also worked with a great team of advisory board members such as National Campaign to Prevent Teen and Unplanned Pregnancies and Planned Parenthood. Pregnancy and sex are two of the themes we deal with in the series. PMC provided the funds and said ‘you are the Latino voice’… so they empowered me to hire the writing staff and write the show from a Latino perspective.

Thanks to PMC, Portugal was able to put to work close to a hundred Latino actors, hire 12 Latino writers and shoot the series over four months in and round East Los Angeles.

Portugal credits input from his hand-picked Latina staff writers who laid the law down on what they didn’t want seen in the show:

“I only had three “no’s” from the writers. No gardeners, no gang members and no maids,” Portugal recounted. “Although there is nothing wrong with these types, I feel that we are over-represented by gardeners, gang members and maids in TV and movies. I know that a lot of my actor friends are sick of playing them. It’s time to create new characters for Latino actors to play and show the world the potential of their range as actors,” Portugal explained.

Season 1 features 24 21-minute episodes. Though all the episodes have been filmed are online, only Hulu+ members can see the unaired episodes. After each episode airs then it’s made available for free to all viewers.

Portugal hopes that the show not only entertains but empowers girls — who are facing the same decisions as the characters about sex, pregnancy and other social issues. To help them, the series provides resources for girls and their families to contact if they should need it.

So far, the buzz has been positive about the show and time will tell if a second season is on the horizon, but one thing is certain — Latino filmmakers continue making their mark online and there’s no holding them back.