LatinaLista — It’s never been a secret that US employers preferred to hire undocumented Latino immigrants for three reasons: they’re cheap labor, they’re expendable and they have no recourse, but to quit, if they don’t like job conditions, their boss or their pay. 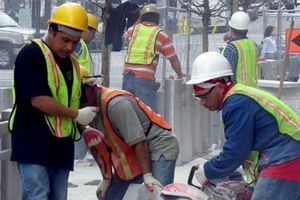 Even with the crackdown by Immigration and Customs Enforcement (ICE) on businesses suspected of using undocumented labor, the sad fact is that there are hundreds more businesses guilty of doing it than there are ICE agents to enforce the law. So, it’s not surprising that a new report released this week by the AFL-CIO, Death on the Job: The Toll of Neglect, reveals that of the 682 Latino workers killed on the job, 63 percent were Latino immigrant workers.

Although the rate of fatal injuries to Latino workers decreased from 4.0 per 100,000 workers in 2009 to 3.7 per 100,000 workers in 2010, the fatality rate among Latino workers was 6 percent higher than that for all U.S. workers. California, Texas and New York had the greatest number of foreign-born worker fatalities in 2010, with 134, 115 and 63 deaths, respectively. Of the foreign-born workers who were fatally injured at work in 2010, 55 percent were Latino.

Overall, In 2010, according to data from the U.S. Bureau of Labor Statistics, 4,690 workers were killed on the job. That’s an average of 13 workers every day and an estimated 50,000 died from occupational diseases. And Latino workers, as we see, fare the worst.

Aggressive steps were taken to address this issue before by having work safety classes conducted in Spanish and improving safety regulations. Yet, critics cite the reason as to why there continues to be a high number of deaths is because of special interests influencing legislation to minimize the very regulations and oversight needed to keep working conditions safe. For workers who don’t have a voice in how they are treated or conditions in their work environment, it’s not surprising their risk for injury is higher.

“Latino workers continue to face higher rates of workplace fatalities, especially those born outside of the United States. And while we have made great strides in making our workplaces safer, too many women and men in this country and around the world continue to be hurt or killed on the job. Workers continue to be exposed to well-known hazards that are poorly regulated and inadequately controlled,” said AFL-CIO President Richard Trumka. “The Obama administration has moved forward to strengthen protections with tougher enforcement, but business groups and Republican legislators have launched a major assault on regulations to protect people on the job. As we move forward to build an economy for our future, it’s important that we commit together to developing and issuing the kinds of rules critical to ensuring the safety of all working people.”

featured, immigrant, jobs, latino, workers
Previous Post Spotlight Nonprofit: Giving teen moms the "hope" of a better future with help to get through college
Next PostVideo: All grown up, children of the LA Riots remember

Spotlight Nonprofit: Giving teen moms the "hope" of a better future with help to get through college
1 Comment
Video: All grown up, children of the LA Riots remember