LatinaLista — Zero tolerance policies in schools have steadily been drawing the disapproval of parents, community leaders and law enforcement when common sense is replaced with absurd responses to children’s behaviors. Now, the latest group to join the growing list of wanting to see zero tolerance policies reviewed is the American Academy of Pediatrics. 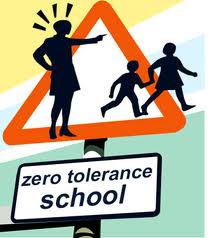 In a policy statement that was published in the organization’s magazine Pediatrics (published online Feb. 25), the segment of the medical community who know children best go on record declaring that they do not support zero tolerance policies that result in automatic suspensions and expulsions. Instead, they recommend that before such a drastic decision be enacted that administrators decide on a case-by-case basis.

The reason is simple:

In raising the red flag on zero tolerance policies in its policy statement, the medical community highlights a glaring disparity:

It is interesting to note that, although zero-tolerance legislation was prompted by violent acts perpetrated by white students, the vast majority of out-of-school suspension and expulsion occurring with zero-tolerance policy applications involve black or Hispanic students.

The policy statement say that the effects of being expelled or suspended are “profound.” They go on to describe how exclusion from the learning environment and being thrust into the juvenile justice system, as many young people who violate current zero tolerance policies are, keeps the students from receiving the necessary counseling or educational services that schools can offer and keep those troubled students from joining the ranks of the “school-to-prison pipeline.”

In the end, the American Academy of Pediatrics asks its members to become advocates for these children and recommends three distinct strategies to keep suspensions/expulsions for only those students who truly warrant such action.

Three strategies schools can use that can lessen the incidence of out-of-school suspension and expulsion are as follows: (1) early intervention programs for preschool children; (2) early identification of children at risk for school difficulties and intensive intervention before problem behaviors occur; and (3) annual implementation of clearly articulated and carefully taught age-appropriate codes of conducts with stated alternatives and supports for students to use before they engage in inappropriate behaviors, such as school-wide positive behavior support.

As the policy statement rightly points out, when students drop out of school everyone pays the price.

New report on teen pregnancy reveals encouraging trend
Comment
Video: Creating a 'Pink Medicine Revolution' that taps into the power of the mind