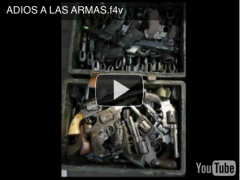 In Mexico City a powerful mixed media exhibit titled “A Farewell to Arms” opened at the Museo Memoria y Tolerancia (Museum of Memory and Tolerance) in Sept. 2011 and runs until April 2012. The exhibit focuses on illegal arms trafficking from the United States to Mexico in an attempt to raise awareness about this deadly business and build the peace movement. Discussions are underway to explore how this exhibit might be brought to communities in the U.S. as well.