LatinaLista — The latest installment of the GOP presidential debates happens tonight and is garnering a lot of national attention, for one reason — it’s in Arizona, Ground Zero for the legislative trend of creating mean-spirited laws meant to drive out undocumented immigrants. 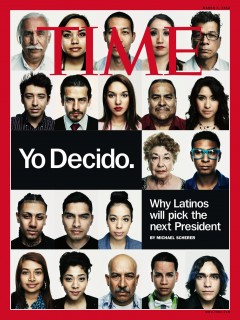 The significance of tonight’s location wouldn’t mean much if it weren’t for the fact that all of the candidates have come out either against immigration reform or, in the case of Newt Gingrich, a modified approach that still offers an unrealistic solution compared to the actual number of people living without status in the nation.

Add to that piece of trivia the new political reality in Arizona. Ever since state legislators passed the infamous SB1070, Latino constituents have organized themselves to the point they are achieving political results. They were responsible for getting a Latino City Council underdog challenger elected last year – on his first try in politics.

If ever there was a state where anger has mobilized disenfranchised voters to take their political destiny into their own hands, it’s Arizona — and that’s bad news for old-school, old-party GOP politicians — but great cover story material.

Though the media and the public have wondered, seriously since 2000, what political damage the Latino vote could do to a candidate, a hint of that determination was witnessed in 2008. Now, the media doesn’t even ask if Latino voters could impact elections, it’s expected.

For example, TIME magazine’s latest edition (goes online Thursday) is all about the Latino vote. Titled “Yo Decido. Why Latinos will Pick the Next President,” the story’s photographer traveled to Arizona to photograph a variety of Latino voters while the author recounts the plight of the GOP with Latino voters.

Though the GOP base in Arizona is still roiled by the influx of undocumented immigrants into the state, the Obama campaign is betting that a backlash led by the growing Latino community can turn Arizona into a new presidential battleground in 2012 — Michael Scherer, TIME reporter.

The author advises readers to listen carefully how the GOP candidates talk about immigration tonight. Yet, as the writer acknowledges, a change in tone on the topic won’t do anything for them in a state primary but could mean a huge difference in the general election.

In this same issue, a Q&A with Florida Sen. Marco Rubio is featured and for a guy who probably gets more bad press among Latino pundits for his strong anti-immigrant views, he starts off sounding like a compassionate conservative and then blows it by parroting the kind of rhetoric that vilifies too many Republicans in Latino voters’ eyes.

On why he opposed the DREAM Act, which would have given high-achieving young immigrants a path to citizenship.

I think for the path to citizenship, the support is not there. I think for the path to legalization there can be a conversation. I think most people would say that’s not amnesty, but it has to be structured in the right way. Then the other thing that I would say that’s wrong with the DREAM Act is it provides for chain migration, which is something people feel strongly about. It can’t be used as an anchor to let as many as 3 million people come into the country.

There’s no doubt tonight’s debate will draw close scrutiny. It will be interesting to see if any of the major networks will have the foresight to include Latino/Latina pundits to offer the proper perspective of how the GOP nominees’ answers resonate with Hispanics.

Yet, even if the networks don’t offer that opportunity, this is the Age of Twitter. Tonight, during the debate, several Latino orgs and web sites have banded together to offer an ongoing GOP Debate Tweet-Chat.

And of course Latina Lista will always have something to say during and after the debate too.

I’m just hoping some people who aren’t of the Arizona Tea Party faithful sneak into the debate hall to add a little “spice” to the night. Otherwise, it’s going to be like tuning into a bad re-run.