Latina Lista: News from the Latinx perspective > Culture > Film > Documentary ‘Harvest of Empire,’ like its protagonists, travel a winding path to achieve a Hollywood Dream

Documentary ‘Harvest of Empire,’ like its protagonists, travel a winding path to achieve a Hollywood Dream

Neither Rome nor Hollywood was built in a day.

With this rationale and a prayer, Eduardo López continues to promote his documentary Harvest of Empire.

Completed this year after nearly a decade in the making, it was denied entrance to such major film festivals as Sundance and Tribeca. “We’ve overcome a great deal to get to this point and now we have some good news,” López says. “In spite of so many obstacles, this film is being embraced by critics and the public.” 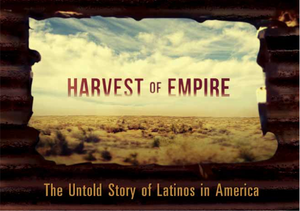 The documentary takes a decades-long trip through a roiled Latin America compacted into 90 rollercoaster minutes. It is based loosely on New York Daily News columnist Juan González’s book of the same name. López co-directed it with Peter Getzels. Through historical footage and bridging narratives by González, Nobel Prize winner Rigoberta Menchu, acclaimed Dominican-American writer Junot Díaz and others, it helps explain how in the approaching mid-21st century, half of the U.S. population will trace its origin not to Europe but to Latin America.

Without fanfare, Harvest of Empire had captured enough attention to yield extended showings in both the Laemmle Playhouse in Los Angeles and the Quad Theater in New York as it makes the case that the mass migration is a direct result of U.S. foreign policy.

U.S.-backed despots and dictators and their heavy-handed rule have led to what Hispanic Link columnist José de la Isla refers to “migrations and unavoidable personal epics…This is not about chauvinism, fake patriotism or ideology, but about understanding the underlying plot,” he says. Harvest of Empire bares the circumstances that drove millions out of Central America, the Dominican Republic, Mexico and our own commonwealth of Puerto Rico. “The documentary is history, sociology and foreign policy combined. It is reality.”

Filmland chronicle Hollywood Reporter mentions the Iran-Contra scandal and credits Harvest for dissecting the roles “played by U.S. military and economic interests” in half a dozen countries.

The Los Angeles Times labels the production as “built for clarity rather than cinematic excitement” and “a valuable resource, a good starting point for a fuller perspective on this nation of immigrants.”

The New York Daily News offers, “In an era of anti-immigrant fervor, this sobering and much-needed look at Latino migration is built on an undeniably optimistic premise that once Americans have accurate facts, they rarely allow injustices to stand.”

Add to all those words the New York Times review. It praises the documentary as having a “journalistic pedigree and a punch that comes from political advocacy.” Now López says he has the ammunition to make his second round of courting studios for wide distribution.

Co-producer Wendy Thompson-Márquez claims, “Now we have a fighting chance to take the film to other cities,” as López adds the spin, “In today’s market, self-distribution is not second-best. It’s a different alternative. For us, the most important response has been from the public.”

Counting the millions of families Uncle Sam uprooted and drove here, he concludes in gross understatement, “Latino audiences in particular have a very emotional reaction.”

(At age 8, Hispanic Link News Service columnist Luis Carlos López immigrated to the United States from Nicaragua after his parents sought political asylum here. Now based in Phoenix, he viewed an advance screening of the documentary at the Brookings Institution in Washington, D.C. Reach him at lclopez4@gmail.com.)