LatinaLista — The bigger question of the 2012 election is not: Who will win but how will voters in swing states vote? 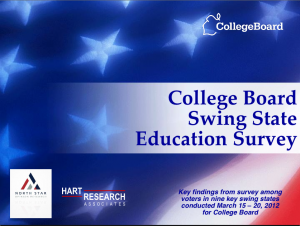 Though nobody has the answer yet, a new report released by the College Board gives pretty good insight into how swing voters feel about one particular issue — education.

The College Board Swing State Education Survey is compiled from about 200 interviews with voters in nine so-called swing states. When asked about education, those surveyed ranked education about the same as government spending and behind jobs and the economy.

While GOP presidential candidate, Rick Santorum, feels expecting someone to attain a college education is “snobbery,” “three in four voters believe that a post-secondary degree is important to achieving success in the workplace.”

In fact, these swing state voters feel that a candidate’s views on education tell a lot about the man:

Candidates who place a priority on education are viewed through a positive lens. They are seen as “forward looking,” “caring about ensuring opportunities for all,” “in touch with the concerns of the average family,” and “understanding what it takes to compete in today’s global economy.”

Swing state voters, especially women, place such a high emphasis on education that the majority are willing to pay up to $200 more in taxes if it means funding education. The survey reveals that these voters believe so strongly that education must be a top issue for the country that they rank it behind only “reducing dependence on foreign oil” as a priority in getting the country back on track.

Cutting across ethnic lines, 65 percent of the swing state voters want children of undocumented immigrants to be allowed legal residency if they complete college or enlist in the military. An option that Republicans have refused to put on the table so far, but as reality sets in — that the DREAM Act is supported by both the Latino electorate and swing state voters — they will be forced to make the hardest decision of their party if they really want the White House.