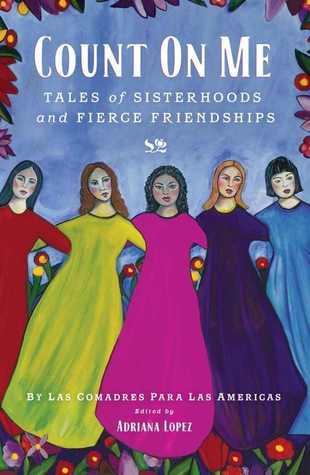 LatinaLista — Before the rise of mami bloggers and the Latino blogosphere there was Las Comadres. Officially known as Las Comadres Para Las Americas, the Austin-based group has been connecting Latinas of all ages and professions across the nation since early 2000, both online and off.

Spearheading the growth of this vast network has been la gran comadre, better known as Dr. Nora de Hoyos Comstock. Partnering with her husband to create both an online (daily email listserve) and offline network of Latinas, (via physical meet-and-greet comadrazos in cities across the globe), Dr. Comstock, who is the national and international founder of Las Comadres para las Americas, has poured her heart and soul into the organization. Part support group, job board, cultural promoter and clearinghouse of professional studies and opportunities, Las Comadres was the first to fill a void that existed among Latinas who wanted to meet other Latinas, both professionally and personally.

Over the years, Las Comadres has been instrumental in helping more Latinas achieve their potential, and dreams, in the pursuit of public policy careers, public office, citizenship and servant leadership by creating unique programs geared specifically for Latinas.

In 2012, under the supervision of Las Comadres, the Empresarias Entrepreneurship Training program was piloted. The first class graduated in May 2012. Eight low-to-middle-income, Spanish dominant women were selected for the pilot which was funded by State Farm. They learned about starting their own businesses. Through the ESL component they also practiced speaking and listening to presentations in English thereby improving their understanding and speaking of the English language. Most of them plan to implement their business plans in 2012.

In addition to professional opportunities, Dr. Comstock has also been successful in introducing new Latina literary talent to the organization’s many members through its book club.

Yet, Dr. Comstock realized that among the many talented members of Las Comadres there were just as many stories waiting to be discovered and shared about the role of comadres in Latinas’ lives. So, she along with a couple of comadres decided to invite a few others to share their stories in the group’s first published book Count on Me: Tales of Sisterhoods and Fierce Friendships.

In twelve creative nonfiction narratives, mostly by women, the authors reflect on the importance of Comadres in their lives. Writers like Fabiola Santiago, Luis Alberto Urrea, Reyna Grande, and Teresa Rodriguez tell their stories of survival in the United States and in Latin America, where success would have been impossible without their friendships. Favorites like Esmeralda Santiago, Lorraine Lopez, Carolina De Robertis, Daisy Martinez, and Ana Nogales explore what it means to have a comadre help you through years of struggle and self-discovery. And authors Sofia Quintero, Stephanie Elizondo Griest, and Michelle Herrera Mulligan look at the powerful impact of the humor and humanity that their Comadres brought to each one’s life, even in the darkest moments.

Currently Dr. Comstock is on a whirlwind Condor Book Tour where this recent inductee of the Texas Women’s Hall of Fame, shares the backstory for the book, the history of Las Comadres para Las Americas and what the future holds for an organization that continues to grow on a daily basis as Latinas build personal and professional relationships with one another.

When and How did the idea come about to publish a book for Las Comadres Para las Americas (LCPA)? What was your motivation for the book? 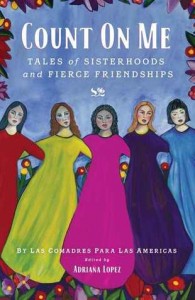 Back in the days when time was slow like a hot summer day’s breeze (that was just three years ago!), Esmeralda Santiago and I used to spend time on the phone discussing literary ideas that Las Comadres could embark on. One of
our favorite topics was an anthology telling comadre stories. Then I met Adriana Dominguez, who is a literary agent who also had the dream and the three of us embarked on the project. Esmeralda became the first author for our
anthology and a great champion to this day.

The motivation for the book truly came out of our memories and experiences with our mothers’ comadres and the present day stories we often hear from our comadres about how they have met women at comadrazos who have became their best friends–their comadres. They are building the comadre relationships which we cherish.

How did you decide on the authors to include in Count On Me?

Besides Esmeralda, it was very difficult to select the eleven other authors. We spent many hours going through our lists and discussing many authors and aspects of their writing, trying to create a near-perfect mix for the first
effort at capturing the essence of the special relationships of comadragzo. We sought diversity in age, ethnicity, geographic distribution, and writing styles. We wanted to include a broad range of writers who would draw on our rich culture and vast experience and be inclusive of women everywhere.

How long did it take from the actual writing to publication? What do you attribute to the success of getting this done?

The last manuscripts arrived to our editor, Adriana V. Lopez, on November 30. The final draft manuscript was submitted to Atria on January 15, 2012. The book was published on September 4, 2012. It was a whirlwind endeavor on the part of the authors, our editor and the publisher. The fact that the mission was accomplished on schedule is due to the level of professionalism and experience of everyone concerned. Our publisher set the pace and everyone rose to the challenge.

Could you describe the process of securing an agent and then selling the rights? Was this content what mainstream publishers were interested in?

In our case we were most fortunate in that the agent found us. She is a comadre and saw firsthand the friendships and bonds which were forming in our networks. The book was a natural outgrowth of our stories and experiences.

Because the Las Comadres and Friends National Latino Book Club has been around since 2006 with our teleconferences and then the physical book clubs in 2008, a number of the publishers know about our interest in preserving and
celebrating our Latino cultures through the written word. Also women’s friendships and the strong bonds that sustain us are topics of interest to women and the book made sense to the first publisher to whom our agent presented the idea.

How many members in LCPA?

What lead to the organization’s decision to start a national Book Club?

Well…one more important element. A person or committee to select the books and a great interviewer. I again was
lucky. My comadre Marcela Landres agreed to be the first person to take the reins of the book selections and the interviews. When she was no longer able to continue in this role, I started inviting guest interviewers but guest interviewers, guest writers and committees to select the books, take their toll on time management sooooo I have
ended up largely doing the interviews myself. It has taken me a while to build the confidence to be the interviewer but I am learning and I love doing it.

But the need for doing something to inform us as Latino/as about our authors became apparent to me when I gave a young comadre a book by a Latina author. She looked at the title and said “I have never read a book by a Latina author before”. She meant U.S. Latina because we have read Latin American authors but U.S. born or someone who writes their work from the U.S…no.

I was stunned but then remembered that it was only a short while ago that I too had had my first exposure to the writings of U.S. born Latinas. If the two of us had this experience, I suspected that there were many more who shared our lack of knowledge about our writers. Therefore I embarked on a mission to change that. I tell this story in the introduction to the COUNT ON ME: Tales of Sisterhoods and Fierce Friendships.

The Las Comadres and Friends National Latino Book Club reads books published in the year we are reading them. We sometimes have challenges getting the books in time to read them, if the publication date and our reading dates are too closely matched. We try to give ourselves two months between publication and reading month.

How many members of your book club?

We have 1200 subscriptions to book club but again I would estimate more like 1000 actual good email addresses.

How do you decide what books to pick for the LCPA Book Club?

Our partner in the book club endeavor is the Association of American Publishers (AAP). We both send to our members the announcement that the book club selection process is open for submission. We do this in late September. The publishers are the ones who must submit the book to the selection process. All submissions go to the AAP and then they are sent to me. Our comadres book club facilitators/coordinators join me and our project manager, Amanda Arizola in selecting the books for the entire year.

Do you plan on releasing more books by LCPA? Will they be in the same vein or will you try out different genres?

We are definitely thinking about more books but since this is our first one, I will need to learn the process first! A successful experience will definitely mean more books!