Guatemalan President Otto Pérez Molina launched a new National Development Plan for Sustainable Tourism, which aims to increase the number of tourists visiting the country by 35 percent over the next 10 years.

Speaking to one of Guatemala’s national newspapers, the president said: “We are setting out to position Guatemala as one of the top tourism destinations worldwide and increase the number of visitors to our country, which will help generate jobs and revenues.”

The plan, which will run from 2012-2022, involves creating a Ministry of Tourism within the Government that will work with local authorities, community leaders and international organizations to attract more tourists. The goal is to present a positive image of the country and tell the world that Guatemala has more to offer than what has been said about it in the past.

The new committee will be headed up by Pedro Duchez, the current director of Guatemala’s Tourism Institute (Inguat).

Tourism represents one of the biggest sources of income in many developing countries and in Guatemala it is the second largest origin of revenue. In 2011, 1.8 million tourists visited the country, but the new Government Plan hopes to increase this number to 2.8 million by 2022.

“Guatemala has a lot of unique products on offer like its selva (jungle) and Mayan archaeology,” says Walter Fischer, Senior Advisor at INGUAT. “It’s cultural tourism that doesn’t exist anywhere else in the world and we want to put it at everyone’s fingertips.”

In addition to promoting the country in places far afield like Germany, Spain and the UK, Guatemala is also being canvassed at a more local level and its Central American neighbours are being encouraged to pay a visit.

“Costa Rica has 25% of what Guatemala has,” insists Fischer. However, since it has promoted itself better in the past, Costa Rica remains a more obvious holiday destination for vacationing foreigners. 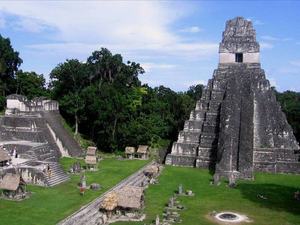 While Fischer admits the level of in-country violence is a challenge to the country’s tourism industry, he insists the international perception of Guatemala remains its biggest barrier to development.

“There’s a lot of negative publicity about Guatemala. But there are also a lot of positive things to say about the country, which rarely get mentioned,” says Fischer.

Recent tourism campaigns have promoted Guatemala as El Corazón del Mundo Maya (The Heart of the Mayan World) and with the upcoming Mayan Prophecy of December 2012 many hope this year will see Guatemala start to fulfil its vast potential within the tourism sector.