GUATEMALA — “You don’t need to see to be able to read” was the message Guatemala sent to the world last month when it launched Central America’s first ever Braille newspaper. 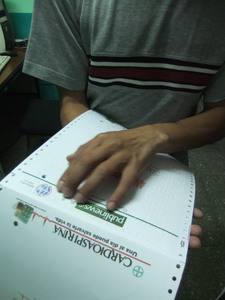 Together with the Committee for Blind and Deaf People in Guatemala (Prociegos), Publinews produced 2,500 copies of the newspaper, which were distributed to visually impaired people throughout the country.

The project, which is financed by four supporting businesses, will continue as a free monthly medium with the aim of giving blind people their own access to the latest news and current affairs.

“It’s important for visually impaired people to have access to different forms of communication and to feel a part of society. They have the same human rights as everyone else and should be granted them by the state,” says Edilzar Castro Quiroz, Director of Education at Prociegos.

It is estimated that more than 110,000 people in Guatemala suffer from a visual disability – a problem that is magnified in rural parts of the country, where access to medical care and special resources are limited.

Jorge Mario Cifuentes lost his sight 20 years ago after he was diagnosed with pigmented retinopathy and now works at Prociegos as the Sports and Recreation Programme Coordinator.

“Having a visual impairment in Guatemala, like any other kind of impairment, is very difficult. Most institutions that deal with this issue are private and the state’s reaction to this subject is very limited – especially on the theme of education. For me to be able to hold a newspaper in Braille is a reflection that society is gaining an awareness of the needs of blind people,” says Cifuentes.

Around eight months ago, Publinews started working with focus groups to find out what specific articles and sections would be of most interest to visually impaired people – and it tailored the content accordingly.

The Braille newspaper has the same 16-page format as Publinews’ flagship version, but features articles that have been specifically adapted to suit the interests of blind people. Prociegos says the newspaper opens up a door to blind people who are more than qualified to contribute to journalism by writing articles and helping with the production process.

“The idea was to create a project that went along the lines of what Publinews represents, which is a positive media for Guatemalan society,” says Hugo Perez, Director of Marketing at Publinews. “We detected that the visually impaired community had been a little forgotten about and we wanted to support them and prioritise their rights; it’s a little drop of water, but it’s making a lot of waves.”

As well as covering the latest international, national, technology and sports news, the paper also features an “Inspirational Person of the Month”, with the aim of motivating other blind people to achieve their potential. This month the focus is on Brandon Aspuac, an athlete who will be representing Guatemala in the 800m and 1500m events in this year’s Paralympic Games in London.

Publinews launched Latin America’s first ever Braille newspaper in Chile two years ago and have been building on the experience in Guatemala. This most recent version has been so popular that Prociegos is already in talks to send it to El Salvador.

“The paper has been very well received by the visually impaired community and there have been lots of people coming directly to our offices asking for it. It’s a complex project that requires a lot of hard work, but that effort is nothing in comparison to what it gives the blind community,” says Castro Quiroz.

Sonia Hernandez works as a telephone operator at Prociegos: “I’ve always been a fan of the news and enjoy reading more than listening. I used to listen to the radio at work, but it was difficult as the phone would ring and I’d lose the thread of the story. When they first gave me this Braille edition, I just sat down right then and there and devoured it. I’m really happy with it. It’s a normal newspaper that speaks about national and international issues – the only difference is that it’s in Braille,” says Hernandez.

Publinews and Prociegos both agree that the most important step now is to increase the newspaper’s circulation and also its frequency, but say that in the short term it will continue as a monthly newspaper thanks to the support of their four sponsors.