A couple of months ago my colleague Mitch Downey and I wrote about how Stand Your Ground (SYG) laws distort the justice system: in states with SYG laws, homicides are twice as likely to be deemed “justified.” In the process of writing that post, we found that there were also substantial racial disparities in justifiable-homicide rulings. 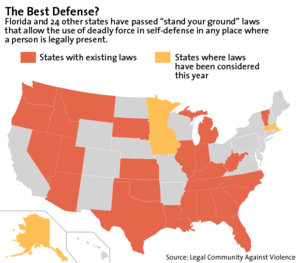 Overall, shootings are ruled justifiable in only 1.5 percent of cases. However, the rate goes up substantially in those cases for which Stand Your Ground laws purport to protect innocent shooters. Specifically, in cases where the victim and the shooter are strangers and a handgun is used, a homicide is ruled justifiable in about 10 percent of cases.

There are many reasons—potentially including legitimate reasons—why this racial disparity exists. It could be that the typical homicide is just different in each case. It could be that black-on-white homicides tend to be street crimes that turn deadly, whereas the white-on-black shootings could be lethal defense in home invasions.

The data we used, the 2005-2009 Supplemental Homicide Reports from the FBI, do not allow us to test this hypothesis. But a racial disparity that large clearly warrants more attention, and we welcome the recent decision by the U.S. Council on Human Rights to investigate the differences.

We were recently contacted by PBS Frontline, who posed a very interesting question: do SYG laws make the racial disparities better or worse?

We used a statistical technique called regression analysis to look at the relationship between the races of the victim and the shooter and justifiable homicide rulings. This method finds the same results as above—black shooters are far less likely to be found justified in a shooting, and shootings with a black victim are far more likely to be ruled justified.

The answers suggest that SYG laws make justice harder to come by all the way around. Compared with white-on-white shootings in states that do not have an SYG law, we find the following:

John Roman, Ph.D. is a senior fellow in the Justice Policy Center at the Urban Institute, where his research focuses on evaluations of innovative crime control policies and justice programs.

featured, guns, homicide, Stand Your Ground laws, violence
Previous Post Mural draws on town's history to be permanent art fixture
Next PostVideo: Latino poet remembers 1984, the way it was — for him

Mural draws on town's history to be permanent art fixture
Comment
Video: Latino poet remembers 1984, the way it was — for him