Since the trailers appeared “For Greater Glory” – a movie about the Mexican Cristero Movement of the 1920s – I have been receiving emails urging me to take a stand because one of the actors is my student. I have not seen the film and I don’t intend to see it because I don’t like the Cristeros. Also, Andy García is not my favorite actor especially since he fanned the hysteria surrounding Elián González in 2000. 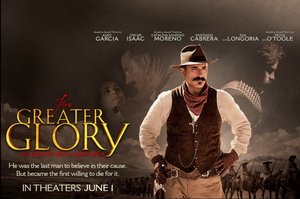 With that said, I have respect for Eva Longoria who wants to do something with her celebrity status and has done more for social justice than most professionals I know. Ruben Blades also appears in the movie, and I have long been a fan of his music and respect his politics.

But the real reason I don’t go see the movie is because it is ahistorical. I heard García’s interview on Univision’s “Al Punto” with Jorge Ramos where he tried to inject his Anti-Castro politics into the discussion portraying the Cristeros as martyrs in the struggle for religious freedom.

My father was a staunch Catholic from Jalisco. He never liked the Cristeros, considering them fanatics. He hated Plutarco Elías Calles for other reasons. My mother’s family was split: my grandfather had a falling-out with his cousin Plutarco but at the same time considered the Cristeros fanatics. During the 1930s, many Cristeros were sinarquistas who throughout World War II supported Spain’s Francisco Franco.

Some promoters of the film have called Calles a Stalin and worse a Hitler. This is extreme. Calles was enforcing the Mexican Constitution of 1917 that called for a separation of Church and State. It was a struggle that had been raging in Mexico since the Mexican Independence of 1821.

Roots can be found in the Protestant Revolt and later in 1767 with the expulsion of the Jesuits from the Americas and most European countries. It was a struggle between those supporting the Enlightenment, a “philosophical movement of the 18th century that emphasized the use of reason to scrutinize previously accepted doctrines and traditions and that brought about many humanitarian reforms” and the inquisitors who supported orthodoxy and were backed by the Jesuits. Another apparent motive was the confiscation of Jesuit’s vast landholdings.

The traditions of the Enlightenment formed the ideology of Mexican liberalism after Independence; Liberals opposed the Church Party that wanted to retain special privileges for the Catholic Church and clergy. For example, priests were not subject to state jurisdiction and could not be tried for sexual abuse, murder or lawlessness in civil courts.

The Church Party fought the secularization of Church property and actively recruited Indians to fight their wars. But to set the record straight, many of Liberals betrayed their principles and used the secularization to dispossess Indians.

The struggle culminated in Constitutional changes in 1858 separating Church and State and taking away the fueros (privileges) of the Church and clergy. They demanded that citizens give unto Caesar what belonged to Caesar and said that marriages and the registration of newborn babies should be the function of the state. Within this context, Liberals granted Protestants and Jews de jure religious freedom.

Conservatives resisted, leading to the War of Reform, 1858-1861, that led to a Liberal victory.

Not content with the outcome, the Church Party invited the French to intervene and supported the ascension of Emperor Maximilian and another Civil war raged from 1861-65. Juárez was excommunicated and accused of suppressing religious freedom.

The Church Party did not die and it continued to fight the state to the point that many Mexicans wanted to lead a schismatic movement. Protestants continued to be suppressed by local communities that were heavy influenced by clergy and the hierarchy. Even during the Porfiriato, 1876-1910, when the Church got back many of its fueros, there was tension between Church and State with Spanish-born clergy expelled.

To understand these tensions one must study similar movements in Europe and Spain which formed the context for the Cristero confrontation. There was a reason for anti-clericalism and the issue of the sovereignty of the state played a large part in the Mexican Revolution of 1910 and the Constitution of 1917 that synthesized previous legislation.

“Article 3 mandated secular education in schools, prohibiting the Church from participating in primary and secondary education. Article 5 outlawed monastic religious orders. Article 24 forbade public worship outside of church buildings, while Article 27 restricted religious organizations’ rights to own property.” Article 130 prevented clergy from wearing their habits. They were denied the right to vote, and not permitted to comment on public affairs in the press. The articles were harsh but they were a reaction to the resistance of the Pope and the hierarchy to reforms.

It must be remembered that the Church and the Spanish Crown during the Colonization of Mexico were one. During Mexico’s War of Independence, the civil wars 1858-65, and Mexican Independence of 1910 the Church sought to make Mexico a Catholic state.

Spain was the most Catholic country in Europe. Even so there was an intense struggle throughout the 19th century to separate Church and State.

Meanwhile, the Pope frequently intervened in the internal affairs of France and Italy. The Pope saw the rise of secular governments as a threat to the Church’s hegemony and moved to extend his power by stacking of the College of Cardinals and passing the doctrine of papal infallibility during Vatican Council I in 1870.

In his struggle for hegemony the Pope turned to Religious Orders, especially the Jesuits, who he used as shock troops. It was a bitter fight and the dogma of Papal infallibility divided the Roman Catholic Church.

It is a distortion to depict the Church’s struggle as one for religious freedom. Rerum Novarum (1891), Leo XIII’s encyclical on social ethics, condemned the materialism of capitalism and socialism. Leo’s fight, according to the New York Times, was against “Socialism, Judaism, Freemasonry and Anarchy.”

By the 20th Century an all-out fight broke out between Spanish liberal Republican groups and the Church. The former opposed the Church’s control of education. Demonstrations broke out and Barcelona became a battleground with the clergy leading the charge.

Spain became increasingly polarized by the church-state question and the Cortes passed a law taking away Church’s privileges. In 1907 the King dissolved the Cortes, saying that the voters would decide the issue and not the parliament. When the King paid a visit to Barcelona the following year, royalist students threw flowers at him.

Other centers of conflict were in Navarre, Bilbao and San Sebastian. The Vatican organized massive demonstrations and formed militant juntas for the defense of Catholicism. Armed peasants led by monks poured into San Sebastian.

The Vatican in August 1910 stepped up personal attacks on the elected the Spanish government. On August 14, the Pope announced that he was sending a Papal Nuncio to interview the Queen Mother.

The Pope said that he was concerned that the actions of the Cortes were turning the Spanish people away from the Catholic tradition. The Pope said he sent the Nuncio to Spain because of the outpouring of support for the Church expressed in letters and telegrams to him.

Tensions intensified with the formation of the Second Spanish Republic in 1931 that touched off a revolt of the Church Party, leading to the Spanish Civil War and the dictatorship of Fascist Dictator Francisco Franco.

In my view, “For Greater Glory” must be put into historical context. The Cristeros War (1926-1929) was a rebellion against the Mexican government’s attempt to secularize the country. The Cristeros were not calling for religious freedom for Protestants or Jews. It was inspired by the Catholic hierarchy that eventually sold out the peasants. At issue was the enforcement of the Mexican Constitution.

If Calles was a Stalin or a Hitler then isn’t it logical that Benito Juárez was also a Stalin and a Hitler? Why do we celebrate Cinco de Mayo?

Peasant revolts are not always progressive especially when agitated by special interests.

Next, Enrique Gorostieta Velarde, the general played by García, was not an idealist.

He was anti-clerical liberal and a 33rd degree Mason. His decision to head a rebellion was for money and personal ambition. He was paid 3000 pesos a month (about $1500), twice what a Mexican general received, and given a $20,000 life insurance policy for his wife. A hefty sum that the peasants could not have paid him.

The fame of the Cristeros rests on myth. In 2005, Benedict XVI beatified 13 martyrs from the Cristero War that the movie amply romanticizes. One of these martyrs was Father Miguel Pro whose life deserves serious study. He was executed on November 22, 1927. Pro was a Jesuit, an order that at the time enjoyed special status with the Vatican.

Though Pro was popular among some sectors he was not the popular figure portrayed in the movie, which does not mean that he was not sincere.

Plutarco Elías Calles did vigorously enforce the anti-Catholic provisions of the 1917 Constitution, but he was hardly implementing the “Calles Law.”

Pro caught the imagination of readers through British author Graham Greene’s novel “The Power and the Glory” (1940). Hollywood made it into a movie called: “The Fugitive” (1947) with Henry Fonda. The movie mythicized Pro; Fonda made him highly human although fictional character.

In the last analysis, given García’s political history and biases, I could not expect more of the film. It is as simplistic as his crusade to prevent the return of Elián González to his father.

In this context, it is difficult to dig for the truth. As the reporter in the film “The Man Who Shot Liberty Valance” (1962) said, “When the legend becomes fact, print the legend.”

Yet that does not make the legend true.

In the end, “For Greater Glory” is a movie just like the Alamo is a movie.

Mel Gibson is not an expert on Mayan history because he made a movie about them, and Andy Garcia is not my teacher because he starred in a fictional movie on Mexican history.