On April 2, 2013, the Associated Press (AP), perhaps the biggest news agency in the world, announced it would no longer use the word “illegal” when referring to immigrants without legal residence or working permits. 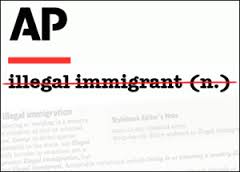 The announcement was made by Kathleen Carroll, Vice President and Executive Editor of AP, who explained that the change will be reflected in the organization’s influential “manual of style” — a must-have book in any news room and for any journalist.

The decision made news. Several articles and opinion pieces were written and different immigrants’ rights advocates and organizations praised the move.

“The decision […] follows an on-line appeal from Cesar Chavez’s 85-year old widow, Helen Chavez, issued by the MoveOn.org online petition site Signon.org […] In it, Helen Chavez asked the New York Times and other media organizations to cease using the word ‘illegal’ when referring to farm workers and other Latinos and immigrants,” explained the UFW in a news release distributed on April 2, 2013.

According to the statement, more than 40,000 people signed the petition, and Mrs. Chavez’s words “appear prophetic now that prospects appear good for enacting comprehensive immigration reform.”

However, it is difficult to believe that AP changed its use of the “illegal” word because of such a petition. As a matter of fact, for many years this use of the “i” word was criticized, without AP taking notice of it.

While working as the editor of the Spanish weekly El Sol, published by the Visalia Times Delta in Tulare County, California, between 2003 and 2011, I sent a letter to AP about this topic. Since El Sol subscribed to AP, I felt responsible for letting them know my opinion about the issue.

In the letter I expressed that the use of the “illegal” word may have racist and/or derogatory connotations. The reason for these connotations comes as “illegal immigrants” or “illegal aliens” replaced the old expressions of “wetback” or “TJ” (Tijuana) to name immigrants without legal residency in a derogatory way.

This terminology was — and still is — used for organizations and activists who oppose immigration as a way to portray these immigrants as lawbreakers or potential criminals. And, by association, most immigrants are suspects of wrongdoing since it is almost impossible to distinguish who has legal residency and who doesn’t.

Wording like this helps to label people and to keep stereotypes.

AP responded a couple of weeks later explaining why they use that word and insisting that they will continue using it. And, of course, they rejected any suggestion of racism.

I wonder how many journalists, not just Latinos, sent similar letters to AP over the years. And how many of these newspapers canceled their subscriptions to AP because of the “i” word.

But, while we may never get this information, let’s clarify that AP was very aware of these concerns, to the point that for its Spanish service the word “undocumented” (indocumentado) was used instead of “illegal.”

This double standard went on for years.

For a long time, most publications serving ethnic communities in the USA used different words to refer to immigrants living in the country without proper documentation, as a well-documented story published by New America Media exposes.

In short, AP argued that “illegal immigrants” was justified due to the fact that those immigrants living in the country without legal residence or working permits entered the country illegally.

Some organizations and immigrants’ rights organizations argued that a person is not “illegal,” actions could be. Robbing a bank is illegal, but nobody calls a robber an “illegal.” AP would certainly call them “bank robber suspects” until a court found them guilty, and then they could be called “bank robbers.”

AP has great dedication to these details, but not when it comes to immigrants, which makes many suspect racism.

AP is responsible for the use of a word used in a derogatory context to describe immigrants who enter the US illegally. Even more, its reluctance to explain and/or modify its use until now can be explained only by political motivations. Which means, in short, that AP stayed politically close to those who bash immigrants.

In the last several years there has been plenty of controversy and argumentation about the word. Let’s remember the most well-known slogan used during the immigrants’ marches of 2006 and 2007: “No Human Being is Illegal.”

This expression was first used in Eli Wiesel’s Nobel Prize acceptance speech in 1986. But it became popular when the late Michael McConnell, Regional Director of American Friends Service Committee in Chicago, Illinois printed up that slogan in Spanish and English on Chicago buses, bumper stickers and t-shirts in 1996 and used it at the Presidential Conventions in San Diego and Chicago in 1996.

It is impossible to believe that AP never wondered about the content and connotations of this message.

So why did this agency drop the “i” word now? For the same reason they arrogantly used it for so long without consideration for contrary arguments: political reasons.

Today’s political climate calls for a flexible stance towards immigration.

Considering the current atmosphere in favor of immigration reform, in Washington and elsewhere, AP most likely didn’t want to look like a rusted old institution. So they decided to change, accepting the arguments that for years they refused to hear.