LatinaLista — Ever since the senseless murder spree at the Colorado theater last week, condemnation of the killer has been universal. Calls for stricter gun control have even surfaced though not with the same intensity of emotional outrage.

However, study after study in the last couple of years, has shown that when it comes to gun control it’s the very people associated with gun violence in the media who are in favor of stricter gun laws — Latinos and blacks.

In a 2011 Pew study, blacks and Latinos outnumbered white respondents in wanting more gun control. According to the question: What do you think is more important – to protect the right of Americans to own guns, OR to control gun ownership?

Seeing that 75 percent of Latino respondents were in favor of gun control, it’s ironic that gun proponents are now ‘defending’ Latinos’ right to purchase guns without being singled out by the federal government.

It came to light last week that a routine form required by the Bureau of Alcohol, Tobacco, Firearms and Explosives for individuals to purchase firearms from licensed dealers, had been modified to require purchasers to identify if their “ethnicity” is “Hispanic or Latino.”

Suddenly, gun rights advocates were speaking up in defense of Latinos for being unfairly singled out. 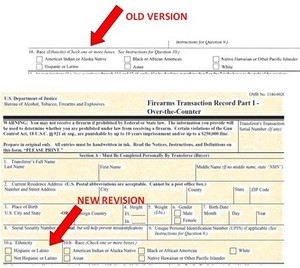 The advocates noted that it probably wasn’t a coincidence that this new requirement was installed after the Fast and Furious debacle or “after ‘emergency’ multi-rifle reporting requirements being imposed on border state gun shops.'”

The one gun advocate who has taken it upon himself to challenge the new requirement, and champion Latinos’ rights, is gun enthusiast and lawyer Evan Nappen. He wrote:

“What if the ‘ethnicity’ question demanded ‘Jew or Not a Jew’?” Nappen asked. “Would that ethnicity question be acceptable?

“[I]t is offensive and not necessary,” he concluded.” It has nothing whatsoever to do with one’s qualification to purchase a gun.”

Another Form 4473 category curious by its absence in light of protracted U.S. military involvement fighting global and domestic terror is one identifying people of Middle Eastern ethnicity, which is instead apparently lumped into the “White” (Arab) and “Asian” (Pakistani) categories. If that is deemed sufficient for security and law enforcement purposes, why Hispanics/Latinos are being singled out could be perceived as even more offensive, as it apparently presupposes government suspicions requiring they all must undergo a universal cartel affiliation check.

However, before we cheer Mr. Nappen’s outrage on the Latino community’s behalf, it must be noted that the only reason he is outraged is because the new requirement would discourage those Latinos who would want to join him in upholding their Second Amendment rights — and add to the current number of gun owners in the country.

Yet, because most Latinos aren’t gun owners, legal or otherwise, this new requirement has fallen below the radar of most Latino activists who would be agreeing with Mr. Nappen and challenging the federal government’s singling out of Latino gun buyers.

From either side it’s looked at, it is a disturbing revelation and one that needs to be called out.

If the federal government is really concerned about identifying potential gun runners for the Mexican drug cartels, there should be other requirements implemented that would do a better, less offensive job. Any type of screening should not identify a person by their ethnicity but by the type, number and frequency of their gun purchases — online, in gun shops and gun shows — and impose a mandatory freeze on any further purchases for a period of time extending over a year if a certain number of guns are purchased.

If only something like this had been in place when the Colorado shooter was ordering all those guns.

No doubt Mr. Nappen would object to this suggestion since it impedes a gun buyer’s purchasing power. But if the outrage at the federal government over a blatantly racist question is sincere then screening all buyers would only be fair, just — and potentially prevent such a gross act of violence of happening again.

discrimination, featured, gun control, Latinos
Previous Post Latino immigrants hold dubious distinction of having the most HIV diagnosis
Next PostVideo: Latino-Chinese teen inventor shares how everyone can be creative — if they put their minds to it!

Latino immigrants hold dubious distinction of having the most HIV diagnosis
1 Comment
Video: Latino-Chinese teen inventor shares how everyone can be creative — if they put their minds to it!