Hispanic Millennials and the Economy: Hit Hard, But Still Optimistic

The number one life goal among Hispanic Millennials is to have a successful career, according to the 2011 Maximo Report. But getting a start on that career is no easy feat: while young adults in general have been hit hard by the weak economy, Hispanics have been hit even harder. 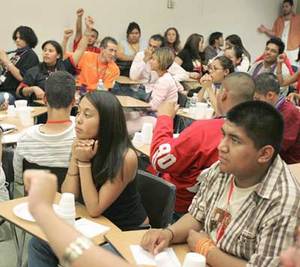 Combined levels of part-and full-time employment are similar among adult Hispanic and non-Hispanic Millennials – but young Hispanics are less likely to be employed full-time and more likely to be working part-time. While 36% of adult Hispanic Millennials have full-time jobs, 42% of non-Hispanics in the same age group do. Part-time employment among Hispanics 18 to 29 is now at 23% — a 56% increase since 2008. 18% of non-Hispanics in this age group work part-time, and there has been no significant change in this statistic since 2008.

Getting a college education is the focus of many adult Hispanic Millennials’ efforts. Full and part-time college enrollment has grown by nearly 60 percent — from 17% in 2008 to 26% in 2012, almost matching non-Hispanic levels (27%). In fact, rising college attendance may be contributing to young Hispanics’ lower levels of full-time employment. A growing proportion of young Hispanics are combining work with college studies, however. In 2012, 27% of employed Latinos 18 to 29 were in college, compared with 16% in 2008 – an increase of nearly 70%.

In spite of their tough economic situation, adult Hispanic Millennials are optimistic about their prospects in the near future. Nearly a third (31%) reported in Simmons that they are about the same financially as they were a year ago – more than those saying they are better or worse off. The majority (35%) also thinks the American economy will be about the same a year from now. Though they are most likely not to have improved financially in the last year and not to expect much change in the economy, the largest group (40%) believes that they personally will be better off a year from now.

It may well be the case that the tight job market remains a challenge for some time. But nonetheless, Hispanic Millennials are doing what it takes to get ahead: working part-time if full-time employment isn’t available, attaining higher levels of education, working their way through college, and believing that in the end their hard work will lead to the successful careers of their dreams.