How the Drug Trade Fuels Femicide in Central America

Since the “Northern Triangle” of El Salvador, Honduras and Guatemala emerged as the main corridor for US-bound drugs, it has become one of the deadliest places in the world to be a woman, and the killings show little sign of abating.

In the first six months of this year seventeen clandestine graves were discovered in El Salvador, containing 48 bodies, 70 percent of whom were females, according to the Attorney General’s Office (FGR). All were aged under 25, and 90 percent are thought to have had links to criminal gangs, reported La Prensa Grafica. 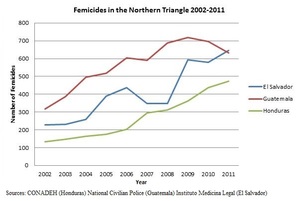 The alarmingly high proportion of women among the victims in Salvadoran mass graves serves as a reminder of the high prevalence of “femicide” — gender-based killings of women, often marked by their extreme brutality — in the Northern Triangle.

The region has seen a huge rise in murders of women in the last decade (see graph, below). Last week Honduras released figures showing at least 150 women were killed in the first half of 2012, with police telling El Heraldo that many of the killings were linked to drug trafficking.

In Guatemala, meanwhile, the national forensic institute (INACIF) revealed that 337 women were murdered in the first half of 2012. Though this represents an 11.5 percent drop from the same period in 2011, Guatemala remains one of the most dangerous places in the world to be a woman.

To attribute all of these deaths to organized crime would be to discount domestic violence and the underlying fact of unequal gender relations — factors which are integral to the femicide dynamic in the three countries. However, the sharp rise in the killings over the last decade has coincided with a period in which the region has become the principal trafficking corridor for US-bound narcotics. The correlation cannot be ignored.

Throughout much of the 1980s and early 90s, drug traffickers typically moved narcotics from South America to the US via the Caribbean. When the US stepped up interdiction efforts on this route, the trafficking corridor was displaced to the Central American isthmus. The contrast between the Bahamas and Honduras is representative of this.

According to the State Department, 80 percent of US-bound cocaine passed through the islands in the 1980s. Today, the proportion is only five percent, while some Honduran officials believe that 87 percent of the US’s cocaine supply passes through their country.

Femicides make up only a fraction of the climb in murders that has afflicted the Northern Triangle since the drug trade shifted to the region. However, the two phenomena are closely linked, with women often becoming collateral damage in conflict between gangs.

One reason for this is that the drug trade is pervaded by a macho culture that drives violence towards females. Women who are seen to associate with gangs, either through family ties or relationships with gang members, can become targets for rivals. Raping and brutally executing these women can be used as a tactic to strike at their enemies, and even as a bonding mechanism for gangs. As Chilean lawyer Patsil Toledo has noted, as well as helping to attack the “enemy morale,” attacking and “cruelly raping women is symbolic [in another way]; it creates cohesion within armed groups.”

Women have also been used as vessels for gangs to send a message to the authorities. For example, in May last year, a gang in Guatemala decapitated a girl, leaving her head in a phone box with a message warning the authorities not to go through with plans to crack down on extortion.

The growth of organized crime in Central America, and the diversification of criminal groups into human trafficking, has also seen the commodification of women, often entailing extreme levels of violence. Honduras, Guatemala and El Salvador are all source countries for the sex trade, with gangs recruiting low-income females with the offer of well-paid work in far-off places, or kidnapping them outright, and forcing them to work as prostitutes.

In recognition of the growth of femicide, Guatemala and El Salvador passed laws in 2008 and 2010 respectively giving special legal status to the crime and violence towards women in general. Since President Otto Perez took office in January, Guatemala has even created a task force to tackle femicide. Honduras, on the other hand, has been slow to follow suit, despite calls for the state’s legislature to pass similar initiatives.

However, these efforts have not as yet born much fruit — impunity for femicide stands at 90 percent or above in both El Salvador and Guatemala, leading many to question the efficacy of recognizing it as a crime in its own right. Lawyer Susana Chiarottin, for one, told Inter Press Service last year that, “Where the legal definition of femicide exists, it has led to greater impunity rather than effective punishment.”

Governments in the region, then, may need to turn their attention to prevention rather than making new laws against the crime. In cases related to domestic abuse, authorities should respond more quickly to complaints of violence or threats. In those related to organized crime, there is a growing chorus arguing that femicide is intrinsically linked to the current militarized paradigm of the war on drugs. Prior to the Summit of the Americas in April, a union of six Latin American NGOs urged governments to review their anti-drug policies, citing the effects of the current approach on pushing up femicide levels. Additionally, two Nobel Peace Prize laureates recently declared, “The war on drugs … has become a war on women,” pointing to the correlation between the rise in femicides and US military aid to Honduras and Guatemala over the last decade.

Reforming drug policy will by no means eradicate femicide, which takes many different forms, some unconnected to organized crime. However, given that the growth of drug trafficking in the Northern Triangle has been accompanied by a rise in gender-based killings, an alternate approach to the drug war could help bring down the numbers.

The original is published on InSight Crime.