Latina Lista: News from the Latinx perspective > Columns & Features > BlogBeat > Improving the Education System in Guatemala is the Only Answer to Violent Crime

Not surprisingly, much has been said about the disturbing violent crime trends in Central America such as murders and massacres by the narcotraficantes continue to evade prosecution by authorities. Those who are most notorious for the killing continue to avoid suffering the consequences for their heinous crimes. 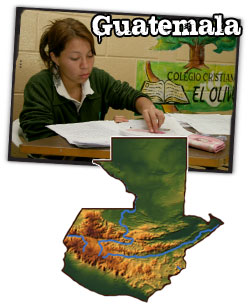 In Guatemala, a nation torn by violence and divided by transnational gangs, former Interior Minister Carlos Menocal released a statement declaring that the homicide rate had fallen from 46 in 2008 to 39 murders per 100,000 residents this past year. If these numbers stand the test of independent research, former president Alvaro Colóm, can use them to tout his successes as newly inaugurated President Otto Pérez Molina takes over.

Even with this slight decrease in violent deaths, the nation still suffers 16 murders a day, and over 5,600 murders a year. Given an impunity rate of nearly 98 percent, just over 100 of these violent crimes would be brought to trial with even fewer still advancing to the sentencing stage.

On January 14, former military general Otto Pérez Molina, who campaigned with the slogan of “firm hand” symbolized by a clenched orange fist, assumed power as the President of Guatemala. There is little doubt that the violent crime in Guatemala and throughout the region must be addressed.

While increasing the police force, ramping up military support, and improving communication between Central American countries are among President Molina’s proposed strategies, the true key to sparing Guatemala will be to improve the standard of education which will go a long way to provide Guatemalan citizens with employable skills.

The Guatemalan education system struggles to combat the economic disincentive within working families. While Guatemala offers free public education in theory, school uniform fees and school supply prices act as economic barriers, preventing students from impoverished backgrounds from taking advantage of government-provided education. Furthermore, for many families, each child entered into the education system represents one less pair of hands that could be working to support his or her family.

Due to the dire economic circumstances faced by so many Guatemalan families, there are only two million children currently enrolled in school. Investing in the education of a child with the idea that the child’s education will ultimately benefit the family in the long-term requires a present sacrifice that many parents just cannot afford to make.

If the decision is between food on the table or a child in school, parents will choose to nourish their families, not understanding the implications of their sacrifices and ignoring the long term consequences. As Guatemalan families are forced to make these decisions, the nation suffers. Future leaders and community voices are failing to gain an education, contributing to a desperate cycle of poverty.

Within the adult population, the average schooling of Guatemalan citizens is just four years. While outgoing President Colóm celebrated the fact that more than one million students returned to school, it remains to be seen if dropout rates will decrease.

Students who leave school early have far fewer opportunities than those who manage to complete their studies. Without an education, doors remain firmly shut and these young minds turn to unskilled labor or crime to support their families. Given the economic pressures these families face when fighting to keep their children enrolled in school, the Guatemalan government has a duty to educate these citizens, and it is failing.

The time and quality of instruction in the Guatemalan education system is appalling. This past school year, 54 days of protests and strikes by teachers unions shortened the Guatemalan school year to a pitiful 146 days of instruction. The comparison to students in Holland, Finland, Canada, and Australia, who study and learn for 200 days a year, is shocking alone but even more so when combined with the fact that Guatemalan students attend school only half of the day.

Rather than lengthening the school year to accommodate for the time lost due to these cancellations, Guatemalan authorities turned a blind eye to the issue and pushed students on to the next grade level, regardless of performance or preparation. Contrary to what the Ministry of Education believes, there is no quick fix; passing kids on to the next level does not mean that they can read, write, or perform long division. The Ministry of Education, in their decision to advance students without teaching them the material, has failed to prepare students and set a dangerous precedent.

While Guatemala proudly touts its national curriculum, the figures show that students are failing to achieve even the most basic levels of understanding. In November 2011, the Great Campaign for Education, a group of private institutions devoted to national educational progress, presented a report highlighting important issues.

Furthermore, students are failing university admission exams, which are based on the national curriculum’s criteria, and demonstrate their lack of preparation for entering higher education. As fewer and fewer students pass these admission exams, prospective students are dissuaded from taking the tests for fear of failure, precluding many bright young minds.

Unfortunately, many teachers in Guatemala’s education system are not adequately prepared to be instructing the country’s youth. When given the same evaluation as their students, Guatemalan teachers failed to answer 80 percent of the questions on material they were expected to be sharing with and imparting to their students.

The lack of teacher preparation is one of the biggest causes for concern in the education system. How can teachers explain the material that they themselves do not understand?

Many teachers did not receive a quality education and thus exhibit poor spelling, poor grammar usage, and little to no understanding of mathematical concepts making them incapable of being effective educators. Furthermore, the study produced by the Great Campaign for Education also found that teachers rarely receive the supplies and textbooks necessary to support their instruction. Improving the education system requires adequate teacher training and resource allocation in order to successfully educate Guatemala’s youth.

The new government must improve the standard of education and ensure job opportunities for graduates if it hopes to reduce the rampant crime and violence still plaguing the country. Throughout the region, poor public education “has given rise to youths without jobs or expectations of employment-thereby fueling the mounting problem of gang violence in Central America.”

Few youths in Guatemala receive the quality education they need to succeed in a professional environment. These young adults, lacking the necessary skills, have few alternatives. Results from the 2011 Guatemalan National Youth Survey confirm that the higher a person’s level of education, the better his or her job opportunities. One factor complicating the idea that education opens doors for graduates is the rampant discrimination in Guatemala’s workforce.

The country will only see the benefit of improving the education system if graduates have access to meaningful employment, where they can utilize skills and knowledge acquired in the classroom. Unfortunately, the indigenous population faces extreme challenges to gaining employment.

The Presidential Commission on Discrimination and Racism Against Indigenous Peoples in Guatemala (CODISRA) released a November 2011 study on discrimination in the workforce. The study found that on average 12 percent of employees in small businesses and 20 percent in medium to large businesses are indigenous people.

Given that the indigenous population in Guatemala comprises between 40 to 60 percent of the total population, this group is dramatically underrepresented in the workforce. Furthermore, indigenous workers earn 50 percent less than their non-indigenous peers. Given the underemployment of the indigenous population combined with wage discrimination, it’s not difficult to understand why indigenous families fail to prioritize education. For these families, even if parents make the sacrifice necessary to enroll their young learner in school, there is little guarantee that he or she will be able to gain employment or receive an appropriate wage.

The key to eradicating racism and discrimination from the workforce is providing quality education to the entire population, not just the privileged elite. Unfortunately, members of the ladino population, the country’s landowners and wealthiest class, have unmatched access to private education institutions, school resources, and educational supplements like tutoring sessions.

President Pérez Molina’s government must improve the national standard of education and ensure that all Guatemalan citizens have equitable access to attaining all levels of education. The famous quote by the American education reformer Horace Mann applies as much today as it did in the 1800s. Mann wrote, “Education then, beyond all other devices of human origin, is the great equalizer of the conditions of men, the balance-wheel of the social machinery.” Providing education on a national scale promotes equality in a country home to rampant social inequality and prejudice against the indigenous population.

The new regime, which assumed power in mid-January, must focus on the larger issues of education and employment and not on the short term benefits of augmenting the police force to improve security. While safety is the human right of all Guatemalan citizens, the government of Otto Pérez Molina must improve access to quality of education while providing meaningful job opportunities for graduates.

Resources must be allocated to the training of teachers, who bear the onus of educating the country’s youth and measures must be taken immediately to strengthen leadership within the Ministry of Education to ensure that student interests are kept in mind. The new Guatemalan government has the opportunity to bring order to a chaotic education system and, in doing so, provide a lasting impact that will continue far beyond the length of their administration.