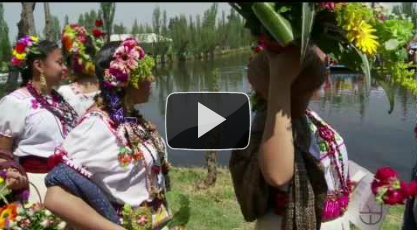 Discrimination and racism against the indigenous and those dark skinned is rampant in Mexico and other South American countries. Greg Brosnan, a documentary filmmaker based in Mexico City, noticed that racism against Mexico’s indigenous population is clearly evident in lack of access to basic services in places such as Chiapas on the southern border. “But in a country where people nickname darker-skinned friends “Negro” without anyone getting too bothered, racism against the mestizo majority is subtler, and harder to put your finger on,” Brosnan said.

That’s why when Brosnan came across a beauty pageant especially for girls of mestizo heritage it was a big deal. “La Flor Más Bella del Ejido (The Prettiest Flower in the Land), in Xochimilco, south of Mexico City, celebrates ‘mestizo’ or mixed race looks, and the girls taking part, between 17 and 23 years old, are very proud to ‘look Mexican.'”