Latina Lista: News from the Latinx perspective > Media > Videos > Intrn’l Video: Brazilian ballet school for the blind teaches its students to always look up even if they can’t see

Intrn’l Video: Brazilian ballet school for the blind teaches its students to always look up even if they can’t see 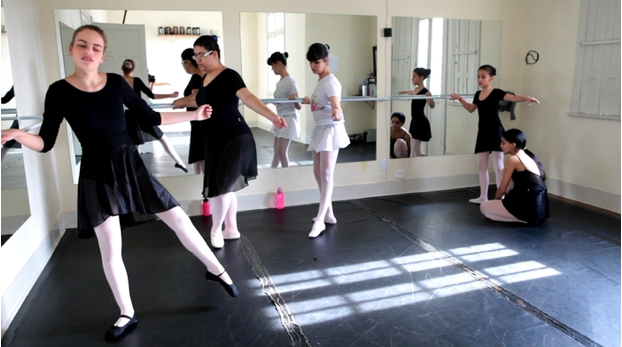 LatinaLista — Ever since the 2012 Summer Olympics in London when the world witnessed in awe the determination, courage and performance of double-amputee South African sprinter Oscar Leonard Carl Pistorius as he raced alongside his peers balancing his athletic limbs on J-shaped carbon-fibre prosthetics, the global community has come to realize that people with disabilities aren’t necessarily disabled.

Now, another group of special athletes want to show the world that they too can accomplish their dreams — even if they are blind. The young students of São Paulo-based Fernanda Bianchini’s Association of Ballet and Arts for the Blind are put through the daily toe and barre exercises as every other ballerina in the world. The only difference is that these ballerinas will never see their routines, the costumes, the set or the audience sitting in their seats — but they don’t have to because enough people will see them, especially after the release of Looking at the Stars … Olhando pras Estrelas.

The documentary on the world’s only ballet program for the blind is due to go in production in May 2013. The film is a USC Documentary Thesis Film by Alexandre Peralta, a Brazilian native and graduate student at USC. It’s also a Kickstarter campaign.

According to the campaign’s page:

The school is at a key moment in their history because of the advancements and steps they’re about to make. In 2012, they moved to a bigger location in São Paulo, and the company performed at the Paralympics closing ceremony in London. In 2013, will perform, for the first time, at the Municipal Theatre, the most traditional theatre in São Paulo.

The film will document the people who participate in both the teaching and the learning of ballet for the blind. We will begin filming the rehearsals and performances of the ballet school in late May as the Ballerinas prepare for their biggest production to date, “Sleeping Beauty” at the Municipal Theatre of São Paulo.

The film’s creative team points out that it’s not only a film about the school and the girls but also their perseverance in life and their passion to achieve against the odds.

The Kickstarter campaign hopes to raise $16,000 which will go towards the usual film production needs plus airfare for the crew from the University of Southern California to Sao Paulo, Brazil and housing and food for the crew for 25 days in Brazil. Deadline for the campaign is February 5, 2013.

ballet, Brazil, featured, the blind
Previous Post U.S. Gov't's Denial of Mexican immigrant's dying wish to see parents is a form of cruelty unworthy of the US
Next Post10 up-and-coming Latin American startups

U.S. Gov't's Denial of Mexican immigrant's dying wish to see parents is a form of cruelty unworthy of the US
Comment
10 up-and-coming Latin American startups