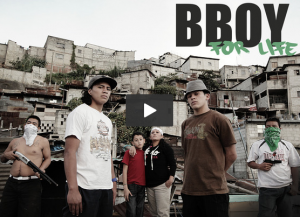 Guatemala is considered one of the most violent countries in Central America. Gangs are rampant and routinely recruit young people to join their ranks.

Yet film director, Coury Deeb, discovered another kind of gang that exists within the violent gang-infested capital of Guatemala City, whose mission is to keep away from the violence and focus only on one thing. Known as the “BBoys,” they live in the city’s ghettos and form “crews” to practice and perform — break dancing.

The documentary, BBoy for LIFE, looks at three characters — two bboys and an active female gang member. The story that evolved is a powerful testament to the next generation’s search for peace and how they’ve learned to survive in one of the most violent parts of the world.

The filmmakers have created a Kickstarter fundraiser to pay for post-production work to finish the film. They need $20,000. The deadline is June 2, 2012.

Previous Post The Conundrum: How to get Hispanic GOPers to sell Latino voters an inconvenient message and believe in it
Next PostSan Antonio Mayor Castro proclaims May 'Bike Month'

The Conundrum: How to get Hispanic GOPers to sell Latino voters an inconvenient message and believe in it
Comment
San Antonio Mayor Castro proclaims May 'Bike Month'