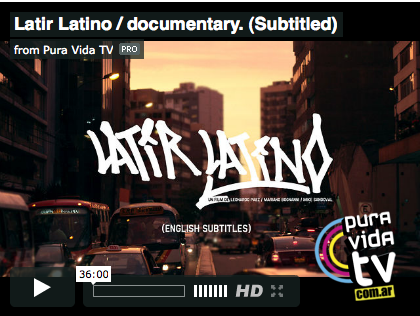 LatinaLista — Latino street artists are known for marching to a different beat where they mix culture with art in their colorful murals and abstract graffiti drawings. Many talented street artists from South America have routinely participated in art festivals in the United States and Europe, showcasing their works.

It was time South America had its own street art festival recognizing their home-grown creative talent — and that’s exactly what happened in February of 2012.

Latir Latino (Latino Beat) was the first of its kind Latin American street art festival that took place in Peru. Over 50 national and international artists, from among such countries as Argentina, Chile, Paraguay, Puerto Rico, Colombia and Perú, descended on the Peruvian district of Miraflores to transform its blank buildings into permanent canvasses of art.

The featured documentary Latir Latino serves as a snapshot, a short history of Latin American urban art, that offers a way to understand from where the artists are coming from, where they are now, where they are going — and the future role of street art in South America.