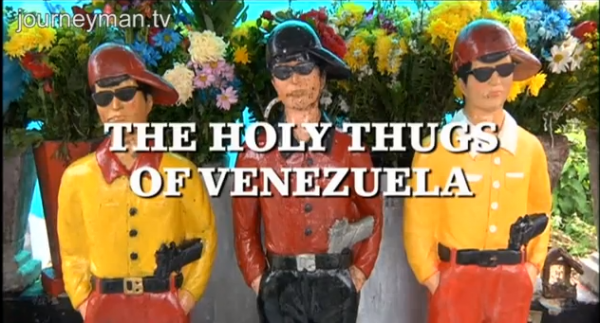 LatinaLista — Mexico has its San Malverde, the patron saint of drug traffickers and criminals. Though the idea of paying homage to a guy that is the patron saint of a gang who show no mercy to their victims or innocent bystanders seems repulsive, the notion of praying to a “narco-saint” isn’t unique to Mexico. It seems people in Venezuela also do it — but they have three such saints.

Collectively, they are known as the Santos Malandros or Holy Thugs and are worshipped by the poor in Venezuela who have lost faith in their judicial system, the wealthy who want protection from criminals and the criminals themselves who want divine help in doing their illegal deeds.

Instead of halos, these saints have baseball caps on back to front, cigarettes dangling from their mouths and guns stuffed into their belts. The main saint that people pray to is Ismael. Like Mexico’s Malverde, Ismael is believed to have been a thug with a good heart who helped the poor. Unfortunately, no true records exist identifying exactly who he was and so with new followers Ismael’s legend grows.

A 2011 article in The Guardian about the Holy Thugs reveals an interesting connection with the growth of a new cult religion in Venezuela “that believes the dead coexist with the living and can be channelled through medium-like people.”

It’s offered as one explanation as to why these kinds of saints have resonated so deeply with the people. For starters, irregardless of whether or not they actually existed, these saints are depicted in modern-day attire that enable people to readily identify with them.

Yet, the whole concept of such saints is such an interesting story that a film crew from Journeyman Pictures decided to delve deeper to understand the motivation of the worshippers and the appeal of the Holy Thugs.

featured, Mexico, narco-saint, Venezuela
Previous Post Latino and black youth in juvenile justice system lose out on getting an education — twice
Next PostMural draws on town's history to be permanent art fixture