Latina Lista: News from the Latinx perspective > Life Issues > Education > Latino and black youth in juvenile justice system lose out on getting an education — twice

LatinaLista — It’s long been known that Latino and black students suffer the brunt of school suspensions and juvenile detention. Today, the Civil Rights Project released a study Opportunities Suspended: The Disparate Impact of Disciplinary Exclusion from School which reports: 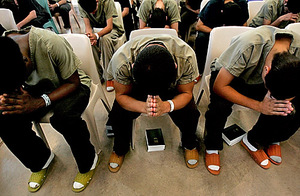 This report comes on the heels of a conference in Cincinnati, Ohio last month sponsored by the Children’s Defense Fund about meeting the educational needs of children in the juvenile justice system. In the first such large-scale meeting of the child advocacy organization in a decade, panelists discussed how children in justice detention facilities had higher needs than the general child population.

These needs include disproportionately higher rates of learning disabilities, mental health disorders, and lower reading and math proficiencies. They are also disproportionately made up of African-American, Hispanic and other minority youth…

Most schools within juvenile justice centers are ill equipped to deal with these high-needs students, a challenge that is often made even harder by the presence of high security measures…

These are kids that a lot of people would rather forget about,” said David Sapp of the American Civil Liberties Union. It becomes a case of “out of sight, out of mind,” especially most people will never actually get to enter a detention facility and learn about the reality of its conditions, he said.