LatinaLista — When Willie Velásquez died at the age of 44 in 1988 from cancer, the nation’s Latino community lost a role model, a defender of civil rights, an innovator, a recipient of the Presidential Medal of Freedom and a leader whose future influence will never be known as to how much more this man from South Texas could have achieved. 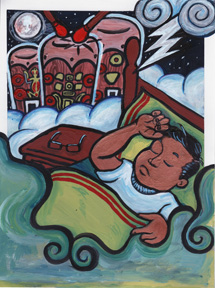 Velásquez was “Chicano” in Texas before it was cool and he made it his mission to share the pride of his Latino heritage with young people by helping found the Mexican American Youth Organization (MAYO). However, it wasn’t long before Velásquez learned that no power or influence of a people is stronger than through civic participation.

Velásquez’s role in the history of Latino civic involvement, both in the nation and especially in Texas, is being forgotten by a new generation who are enjoying the results of what Velásquez and his colleagues fought so hard for. But not anymore.

Plans are underway to create an interactive children’s pop-up book based on the life of Willie Velásquez. Titled “The boy made of lightning,” the book targets third through fifth graders and will feature sound, photos, video, original music and voice.

The team is working to finish the 25-page book in time to debut on September 16, the start of Hispanic Heritage Month.

Needing cash donations to help finish the book, the team created a web site — Willie Velasquez Book — explaining the project, documenting the progress and telling a little bit about the history of Willie Velásquez — and why it’s so important that future generations know about a man who spearheaded voting rights for Latinos.