LatinaLista — Cartoon characters. They are more than just animated figures on a screen. For young boys and girls, cartoon characters serve as an introduction to role models. For that reason, it’s not uncommon for many adult women to cite cartoon characters as the first who inspired them to do and be more or enlightened them to the fact that not all girls play nice. 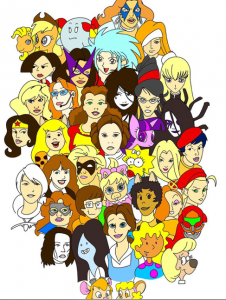 Supergirl, Wonder Woman, Dora the Explorer, Velma from Scooby Do, the list of notable female cartoon characters goes on and on and that’s just the way New York-based artist Ray Sumser likes it. Sumser launched an unique project on International Women’s Day where he is drawing a picture of the greatest fictional females.

But there’s a twist.

Sumser wants people to suggest which female characters to include in his picture. He’s doing this project via Kickstarter. For $15.00, people can have the female character of their choice drawn into the picture but Sumser wants contributors to also share their stories of why the character is so significant to them.

When looking at Sumser’s drawing so far, one is struck by two things: the instantly recognizable faces that represent the childhood of anyone who grew up in the U.S., and just how U.S.-centric are the characters.

For a nation of immigrants, I thought it would be cool to have other memorable female cartoon characters from around the world represented in Sumser’s drawing. I wondered if Sumser was open to the idea.

“While the project is definitely built from American culture, I’d be excited to include some more international characters,” Sumser replied via email to Latina Lista. “The most important things to me are broad recognizability and cartoon style. It will be easier for me to make characters look like themselves if they come from a drawn medium.”

Offhand, I can only think of one character who would fit perfectly with Sumser’s project: Mafalda – a 6 year old determined girl concerned about her fellow man and world peace, and who is instantly recognizable throughout Latin America.

Yet, there has to be more.

Since launching, Sumser says the response has been great and he’s already over his Kickstarter goal, with only a couple of weeks left until the deadline on March 29, 2013.