Latina Lista: News from the Latinx perspective > Media > Videos > Video: Documentary shows that the hungry in the nation don’t always have ‘A Place at the Table’

Video: Documentary shows that the hungry in the nation don’t always have ‘A Place at the Table’ 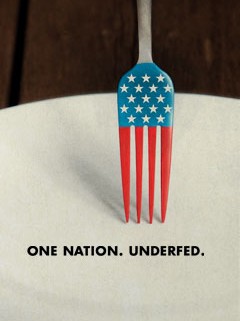 LatinaLista — The politically correct term is “food insecurity” but most people know it as “going hungry.” Over 50 million people in the United States are reported to not know where their next meal is coming from. As a result of the recent recession and continuing hard economic times, people who never before worried about not having enough food are comprising the new “hungry.”

It’s not any wonder that everyone from high school students to entrepreneurs are creating ways to take the leftovers from restaurant meals to donate to food banks. Yet, being hungry and having to go to a food bank can be a traumatic experience for people not accustomed to accepting charity.

A new documentary, by the same filmmakers who created Waiting for Superman, filmed A Place at the Table: One Nation. Underfed., to put a face to food insecurity — three faces to be exact.

Barbie, a single Philadelphia mother who grew up in poverty and is trying to provide a better life for her two kids; Rosie, a Colorado fifth-grader who often has to depend on friends and neighbors to feed her and has trouble concentrating in school; and Tremonica, a Mississippi second-grader whose asthma and health issues are exacerbated by the largely empty calories her hardworking mother can afford.

The filmmakers contend that in the past the nation was able to conquer a hunger crisis and can do so again — if there is a collective will to do so. Their hope is that a film that shows the stark reality of how going hungry impacts children, families, society and the economy will be the wake-up call needed to get back to the realization that everyone has a right to food and eating healthy.