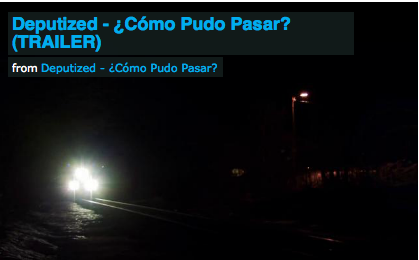 LatinaLista — Marcelo Lucero, the Ecuadorian immigrant who was maliciously beaten to death by a group of Long Island teens “beaner hopping” in 2008, put the first face to hate crimes against Latino immigrants. The crime shocked the nation in that these teens would purposely attack Lucero believing that it was ok because he was Latino.

The story received international attention in the aftermath of Lucero’s death, the trial of the teens and the local community’s reaction to the horrific act. Yet, like with everything else, time fades memories and emotions but a new film hopes to remind people of the ugly act in the hope that it raises a new awareness that such crimes are sometimes allowed to happen by local communities and who is really accountable because of it.

Deputized – ¿Cómo Pudo Pasar? “examines how the game of “beaner-hopping” was allowed to flourish, persist and result in murder: from the politicians who used anti-immigration as a campaign tool, to the police who mishandled bias cases for years, to the school that ignored tensions, to the parents who never suspected that their sons would act on their seemingly-innocent anti-immigrant views, to the press that sensationalized it and to the justice system that needed a scapegoat.”

According to a write-up by Ted Hesson of the immigrant advocacy organization Long Island Wins, and who served as a consultant for the film:

Deputized, or ¿Cómo Pudo Pasar?, as it’s titled in Spanish, is fully bilingual and was produced and directed by Susan Hagedorn, a nurse turned filmaker and the daughter of the late Long Island philanthropist Horace Hagedorn…The documentary is the rawest and most comprehensive examination of the Lucero killing to date, providing intimate interviews with the Lucero family…

As with any family who suffers such a tragic loss under conditions where the odds are stacked so high against the victim, their loved one, their grief and search for justice will never fill the hole left in their hearts. It’s all the more maddening because Lucero was murdered for just being who he was — a Latino immigrant.

featured, hate crimes
Previous Post How far can you go on one burrito?
Next PostLocal Latino blind student will represent California in national competition

How far can you go on one burrito?
Comment
Local Latino blind student will represent California in national competition