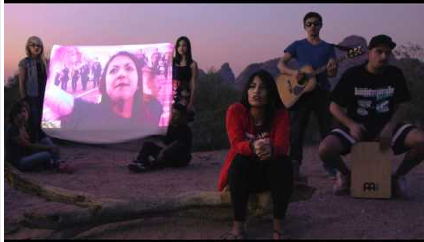 LatinaLista — Ana Tijoux may not be a household name — yet, but this young French-Chilean musician’s star is rising fast throughout South and Central America. So far, she is best known for collaborating with Mexican singer Julieta Vinegas on “Eres Para Mi” but Tijoux’s voice is becoming recognizable as a singer with a conscience.

The daughter of Chilean expatriates who fled Chile’s oppressive regime for freedom in France, Tijoux understands the fight for social justice. In 2010, she received a Grammy nomination for her album “1977” where she sang about political injustice, as well as, her life in France.

Now, Tijoux is singing out again against political and social injustice with a new collaboration. Together with the National Day Laborer Organizing Network (NDLON), National Immigrant Youth Alliance and the Puente Movement, Tijoux has released her latest video “Shock.”

The video is part of the Alto Arizona campaign that highlights Arizona’s anti-immigrant stance. Against a backdrop of news footage ranging from DREAMer students protesting to marches against Maricopa County Sheriff Joe Arpaio, Tijoux (literally) voices her support for the ongoing civil resistance against Arizona’s infamous SB1070.