LatinaLista — The recent statehood vote in Puerto Rico, where the majority voted to become a US state, signifies a bittersweet paradox for Puerto Ricans serving in the military. Under its current commonwealth status, Puerto Ricans can enlist, and even be drafted, into service though they don’t have the right to vote in U.S. elections. 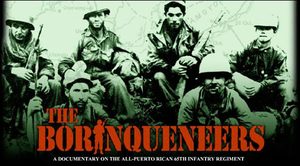 It was exactly that nuance that served to inspire one particular regiment who made their mark as the only all-Hispanic unit in the history of the U.S. Army, and who now struggle to get Washington to recognize their service by awarding the Congressional Gold Medal to its surviving veterans.

The U.S. Congress created in 1899 the Puerto Rican 65th Infantry Regiment. Primarily composed of Puerto Ricans, the unit served in World War I, World War II and the Korean War.

When they were finally called to the front lines in the Korean War, the men of the 65th performed impressively, earning praise from General MacArthur. They performed a critical role containing the Chinese advance and supporting the U.S. Marines in the aftermath of the Battle of the Chosin Reservoir. Sent to every corner of the peninsula, they showed outstanding resilience and a legendary fierceness as combatants, even as they faced discrimination within the Army.

The men in the regiment came to be known as the Borinqueneers, a nickname derived from the word “Borinquen,” “the word given to Puerto Rico by its original inhabitants, the Taino Indians, meaning ‘land of the brave lord’.”

Over the years, the service of these patriotic veterans was gradually being forgotten until in 2007 the documentary THE BORINQUENEERS, a film about the service of these brave soldiers was brought to the public. Since 2008, the film has garnered one award after another and continues to be screened at film festivals around the world.

As a result of the film, and a renewed awareness of the Puerto Rican 65th Infantry Regiment, advocates are fighting for the regiment to gain its proper place in US history by 1. being commemorated on a U.S. stamp and 2. receiving the Congressional Gold Medal.

Although more than 20,000 Puerto Ricans have served courageously as Borinqueneers since World War I, their contribution and sacrifices have gone largely unnoticed. Honoring “The Borinqueneers” with a commemorative U.S. stamp would be a fitting tribute for these brave soldiers and serve to educate the American public about their existence and service.

borinqueneers, commemorative stamp, Congressional Gold Medal, featured
Previous Post Celebrating the Latino Vote in Escondido
Next PostImmigration on the table for 2013, Obama must take the lead

Celebrating the Latino Vote in Escondido
2 Comments
Immigration on the table for 2013, Obama must take the lead