LatinaLista — Valentine’s Day is the busiest day of the year in the restaurant industry. It’s a day when diners will be trying to show their love and affection for their special someone by ordering the best money can buy. Yet, ironically, it’s also a day that highlights how no love is lost when it comes to wages and treatment between the restaurant industry and the people who comprise over half of its workforce — women. 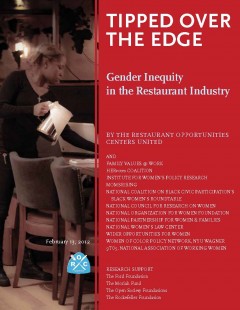 A new report released today by the Restaurant Opportunities Center (ROC) titled “Tipped Over the Edge — Gender Inequity in the Restaurant Industry,” reveals that women working in the restaurant industry face a variety of factors that contribute to them living a hand-to-mouth existence.

While discrimination exists, for example, women are mostly confined to the lower-paying segments of the industry such as quick-serve and family style dining rather than the highest-paying fine dining segment, it’s the discrimination in wages that are proving most harmful.

The federal subminimum wage for tipped workers has been frozen at $2.13 since 1991, losing 40 percent of its value in real terms. Employers are allowed by law to pay $2.13 per hour to tipped employees as long as tips make up the difference between $2.13 and $7.25.

However, survey and interview data gathered by the Restaurant Opportunities Centers United (ROC-United) indicate that employers frequently ignore this requirement. Servers, who are 71 percent female, comprise the largest group of all tipped workers, and experience almost three times the poverty rate of the workforce as a whole.

Adding insult to injury, women in the restaurant industry are more than five times the rate for the general female workforce to report sexual harassment with the Equal Employment Opportunity Commission (EEOC).

Also, 90 percent of restaurant workers report not receiving health benefits or employer-paid sick days. In fact, “two–thirds reported having to cook, prepare, and/or serve food while sick because they could not afford to take unpaid time off.”

The report’s authors offer several policy solutions to not only correct this inequity but bring justice to women who may feel trapped in their present circumstances either because of lack of skills, education or other available employment opportunities. Among their policy recommendations are:

Previous Post "Texans on wrong side of border fence grow anxious."
Next PostGuest Voz: Obama Steps Up for Communities of Color in Proposed Budget

"Texans on wrong side of border fence grow anxious."
1 Comment
Guest Voz: Obama Steps Up for Communities of Color in Proposed Budget