LatinaLista — A new study by the youth research organization, the Center for Information & Research on Civic Learning and Engagement (CIRCLE), finds that college not only makes a big difference in finding jobs with good salaries for young people but also serves as an entryway into civic engagement. 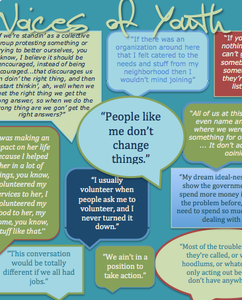 According to CIRCLE, 40 percent of 18-29 year-olds have no college experience. This translates into two distinct problems for the nation’s electoral process:

1. Political, especially presidential, campaigns that focus on campus outreach to attract youth voters are missing a huge portion of the population and

2. Non-college youth don’t feel particularly connected with anything beyond their own social networks. Given that to be the case, civic participation is not a high priority for them. In other words, expectations for voter turnout among non-college youth is very low.

The report underscores the undiscovered gold mine non-college youth present to political parties, communities and non-profit organizations if they can only learn how to reach this segment of the youth population.

Non-college young people are underrepresented in groups, meetings, projects, and elections. Their underrepresentation has grown more severe over the last four decades. Consequently, communities miss the potential contributions of large numbers of youth, and the youth miss opportunities to be nurtured and shaped into active citizens. Not only do they lose political influence and the capacity to improve their own communities, they miss the chance to develop the skills, relationships, and psychological benefits.

Gathering the data, the report’s researchers round out the data with the Summary of other important research about what influences youth civic engagement and development and offers recommendations based on the conversations held with non-college youth and the findings of why they feel disenfranchised from civic engagement.

As one of the youth interviewed for the report said, “People like me don’t change things.”

Lord of the tree rings: What trees can teach us about fire and climate change
Comment
Immigration agents' suit against President and deferred action program reeks little of conscientious objectors