Latina Lista: News from the Latinx perspective > Palabra Final > Immigration > Romney’s olive branch to Latinos proves to be a zinger of a backfire

LatinaLista — It’s said that in preparation for his debate tomorrow night with President Obama, Mitt Romney has been working on delivering zingers. Those one-liners that pack a punch and people remember for decades to come. 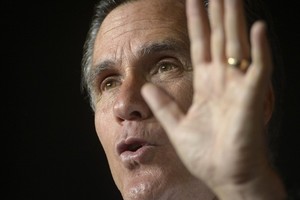 It seems that the Romney camp wants to get some early traction with those zingers.

Today, Romney announced that he would honor the temporary work permits granted to DREAMer students under President Obama’s Deferred Action for Childhood Arrivals.

According to his statement:

“The people who have received the special visa that the president has put in place, which is a two-year visa, should expect that the visa would continue to be valid. I’m not going to take something that they’ve purchased,” Romney told the Washington Post, promising to put a comprehensive immigration reform plan into place before those visas expire.

Romney’s statement is a helluva zinger — unfortunately, for him, it’s not going to stick with the average Latino voter.

For starters, it’s a 180-degree turn from what he has expressed in the past about his feelings for DREAM students. From a man who still believes self-deportation is a viable way to thin out the undocumented population, the majority of Latinos who heard Romney’s announcement today have expressed disbelief — as in not believing him.

As one Latina Lista Facebook reader wrote: “I do not trust what this guy says. He is trying to win by any means necessary. He already had said that he would get rid of the Dream Act once and for all.”

It’s the same sentiment expressed over and over in emails received by Latina Lista and posts throughout social media by Latinos who are less moved by Romney’s sudden act of conscience and more appalled by his audacity that anyone would buy that he’s sincere.

Representative Luis Gutierrez from Illinois, a vocal and strong supporter of the DREAM Act summed up Latino reaction to Romney’s gesture:

Mitt Romney is looking at polls in Colorado, Nevada, Florida, North Carolina, and a lot of other places and realizing that winning enough Latino voters to win those states does not fit with his threats to veto the DREAM Act… It tells us all we need to know about Mitt Romney that he sees fundamental fairness and decency for immigrant children who grew up in America as nothing more than a “purchase” he doesn’t want to cancel. Protecting these young immigrants from being deported sounds no more important to Mitt Romney than protecting someone who bought a sweater at the mall. I have news for Mitt Romney: you don’t “purchase” fairness, you earn it, and these young people earn it every day of their lives…

Chances are that if Romney was president he would honor those work visas but only for the two years. Afterwards, no telling what he would instruct the Department of Homeland Security to do with the students whose names are then known to be undocumented.

As Rep. Gutierrez and other Latino voters so correctly surmised, this is a sorry last-ditch attempt to appeal to Latinos by putting out a positive message on an issue that his campaign is finally realizing could be an election-breaker for their candidate.

Romney would have been better off by not changing his stand or making semantically pleasing declarations that, in reality, didn’t reflect a change of heart.

If Romney and his campaign thought this sudden declaration would be the pre-debate zinger he needs to make him memorable — they were right.

Latina Cubicle Confidential™ Are You the “Go-To-Person” in Your Office?
Comment
Intrn'l Video: Resurrecting respect, prestige and hope for Panama's suffering baseball program