One of my favorite memories as a kid was when my parents took me to the circus. I loved watching the lion show. It was incredible how one man, with nothing but a whip in one hand and a small chair in the other, could control a 500-pound ferocious beast. 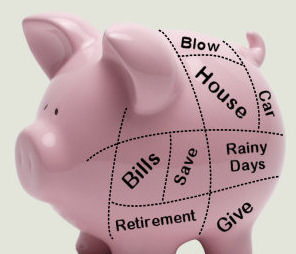 A full-grown lion with three-inch fangs could maul the handler if he wanted to, but the lion remained tame because of those two tools. That handler wouldn’t dare go in there without the whip and the chair, because the consequences could be deadly.

Approaching your money situation without a budget is like going into a lion’s cage without a whip and a chair. I know what you’re thinking: I’ve tried budgets before, and they don’t work, or Budgets are for businesses, not for us. We’re just a normal, average-income family.

You can’t be afraid of the word “budget.”

You know what’s scarier than making a budget? Having nothing to show for all the money that will go through your fingers in the coming years.

Every day, I talk with people from all types of income levels, and I can tell you that rich people live on a budget. Now you’re probably thinking, Well if I was rich and had a lot of money, I would have a budget too.

That’s not how it works! They became rich because they have a budget. It’s the secret weapon that allowed them to get out of debt, build an emergency fund, and invest so they could be financially independent.

Budgets may sound complicated, but they really aren’t. Having a budget simply means you have a plan for your income. Like John Maxwell said, “A budget is telling your money what to do instead of wondering where it went.”

Here’s how to do it. On a clean sheet of paper, write your monthly income at the very top. Then, make three categories: Give, Save and Spend. List your expenses — all of them — on the paper. Put your dollars where they need to go until you have assigned every last penny of your income. The goal is to spend every dollar, on paper, all the way down to zero. That’s called a zero-based budget.

If you’re tired of overdraft fees, service charges and crisis living, make a commitment to not spend money on anything that isn’t a part of your plan. Decide to stop spending based on how much you have in the checking account and start telling your money where to go.

Don’t face the “lions” without your whip and chair. Battle back with the budget!

Andres Gutierrez is a financial expert, host of “The Andres Gutierrez Show” and creator of Paz Financiera. A successful entrepreneur and small-business owner, Andres Gutierrez knows what it’s like to start with nothing and build lasting wealth. In 2009, Andres joined Dave Ramsey’s team to bring the message of Financial Peace to the Hispanic community. For more information about Andrés Gutiérrez visit his website “Andres Gutierrez” and follow him on Twitter at @elshowdeandres and on Facebook.