Latina Lista: News from the Latinx perspective > Causes > Nonprofit > New UN global initiative wants everyone to answer: What kind of World do you want?

New UN global initiative wants everyone to answer: What kind of World do you want?

LatinaLista — In 2000, world leaders created the Millennium Development Goals (MDGs). It was a promise that the developed countries of the world would work together to end extreme poverty by 2015. 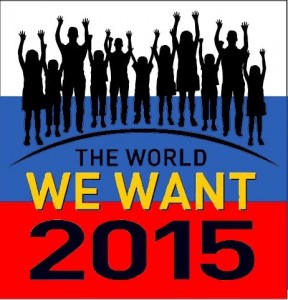 Two years from that goal date finds that the world has made a lot of progress:

The number of people living in poverty has fallen to less than half of its 1990 level. Over two billion people gained access to better drinking water. The share of slum dwellers living in cities fell, improving the lives of at least 100 million people.

However, there are 1.4 billion people still living in extreme poverty.

Every 4 seconds a child dies from preventable causes and over 900 million, particularly women and young people, suffer from chronic hunger. Meanwhile our population is set to rise to 9.5 billion by 2050 and the food system is at breaking point.

Climate change threatens to destroy the lives of millions more and undo all the progress we have made so far. Inequality is growing everywhere and human rights are being undermined in the worlds most fragile and conflict affected countries while the world economy continues to falter.

Even with the doom-and-gloom outlook of what is left to be done, there is still hope that MDG goals can be continually met. Organizers of a new global campaign — The World We Want 2015 — say that the planet’s population has the “resources to end poverty and grow our world sustainably.”

But the key ingredient is global cooperation. To that end, The World We Want 2015 campaign offers people from around the world the opportunity to share in that cooperation by voicing their concerns/aspirations on the website. The organizers hope to pass along the thoughts and ideas collected on the site to the United Nations and world leaders to help in drafting a new global development agenda to be launched in 2015.

On the site, various “Global Online Conversations” are held concerning different themes. Open conversations are referred to as thematic consultations which are based around a specific issue. For example, the United Nations is hosting a consultation on how to address inequalities in the world.

Contributions don’t only have to be made via the web site. Social media is also being tapped to make it easy for people to share their ideas. On Twitter, the conversation can be found @worldwewant2015 and also with the hashtags: #post2015, #beyond2015, #Inequalities2015.

To urge people to participate, organizers pose one simple question to the world’s population:

What kind of World do you Want?

Border Security and Migration: A Report from South Texas
Comment
Tejano Filmmaker Challenges Texas History As She Honors Her Heritage