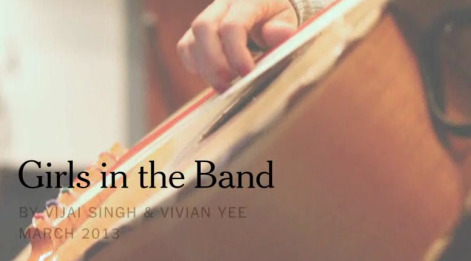 LatinaLista — Mariachi music is synonymous with Mexico. The music and its singers are iconic figures of Mexican culture, and in turn, to all people of Mexican descent wherever they live. That is true especially for the Mexican American community in the United States.

What once was considered to be nothing more than a genre of music played at Mexican fiestas and restaurants or in honor of our Our Lady of Guadalupe on her feast day has evolved in the United States to being more. From mariachi classes taught in high schools to mariachi competitions, the mariachi style of music has gained greater recognition in the United States.

And as a country that likes to innovate, the United States has also become home to groups putting their own twist to the traditional music. Though mariachi is customarily all-male ensembles, with some having a female lead singer, more and more all-female mariachi groups are springing up across the United States.

Now, there seems to be one in New York City as chronicled by the New York Times in this featured video of the mariachi group Mariachi Flor de Toloach.

What’s unique about this mariachi group is that not all of them are Mexican but they all share a love of performing songs known to ‘bleed the heart’ and speak to the soul of a people for whom mariachi is more than just singing songs — it’s honoring history, love and culture.

all girls, featured, mariachi, Mexico, New York City
Previous Post GOP governors' denial of Medicaid expansion in their states is one outreach Latinos will take to heart — and to the polls
Next PostSpring into action – April is Military Child month