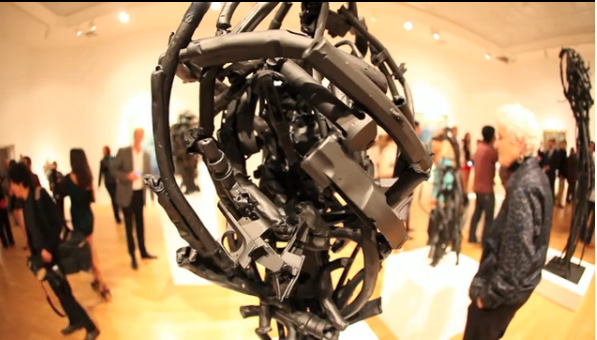 LatinaLista — Victor Hugo Zayas is an award-winning sculptor and recognized painter. Yet, for some, this Californian artist is a miracle worker — of sorts. Zayas takes illegal guns that the Los Angeles police department receives in their community gun buy-back program and transforms the weapons into works of art — and symbols of peace.

…earlier this year, two tons of the guns, shredded and crushed down into a mass of twisted metal, were delivered to the artist’s studio.

He began welding and assembling, wondering, “How do I take something negative and make it positive?” Gradually, portraits began to appear—visages, and profiles, often of people he knew. From Francisco Goya on, Zayas said “the idea of making a portrait of violence is a tradition.” Yet, he asked himself: “How do I make portraits out of metal? Portraits have an energy—how do I capture it?”

According to art critics, Zayas has done an effective job of infusing the natural energy that emanates from a portrait into his sculpted works of bent metal with a violent past.

Guest Curator Gregorio Luke saw this power demonstrated at an event for relatives of crime victims at which a photograph of one of Zayas’ gun sculptures was shown. He was worried at first about the crowd’s reaction. “These are people who have lost brothers, sons, daughters, parents. No amount of longer sentencing, no number of increased arrests, can heal their hearts. How could a sculpture not seem trivial?” Yet, when the image was unveiled, “The energy in the room completely changed,” he said. “I felt a transformation in the content of the conversation. I never realized art could be so meaningful.“

Earlier this year, Zayas works were on display at the Laguna Art Museum in Laguna Beach, California.