Video: Inspiring and entertaining children is the goal of illustrator Rafael López 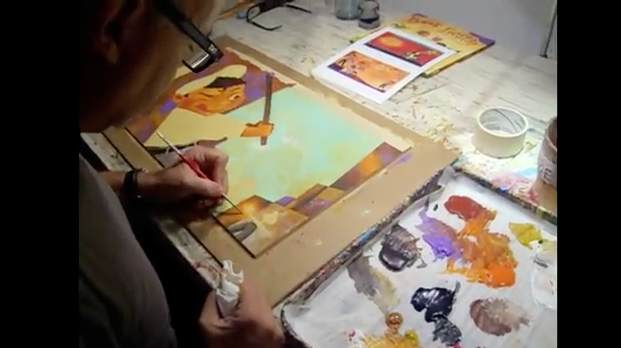 LatinaLista — Rafael López doesn’t see the world as black and white. He sees the world pulsating with vibrant color and larger-than-life characters which has enabled him to be regarded as one of the most talented Latino illustrators in the nation.

Primarily known as an illustrator for children’s books, López has the distinction of being entrusted by the U.S. Postal Service to bring to life some of the most loved Latino music artists for the postal service’s Latin Music Legends series.

His illustrations for Book Fiesta! written by Pat Mora were the recipient of the 2010 Pura Belpré Illustrator Award given by the American Library Association to honor work that best portrays, affirms and celebrates the Latino cultural experience in children’s books. His children’s books have also won 2 Americas Awards and a Pura Belpré Honor. His 2008 poster Voz Unida was selected by the Obama/Biden campaign as an official poster at Artists for Obama.

In addition, he’s paying it forward with his talent by working with children in creating community murals.

Dividing his time between San Diego, California and San Miguel de Allende, Mexico, López literally draws inspiration for his drawings and his style from both sides of the border.