LatinaLista — Scott Montoya knows who’s funny in the world of comedy. He should. A 20-year veteran of the entertainment industry, Montoya has been involved with the careers of over 26 comedians and produced such popular acts as Original Latin Kings of Comedy 2002, The Payaso Comedy Slam and The Original Latin Divas of Comedy. He’s produced and directed over 65 stand-up comedy specials for the Showtime Network and created his own Latino-based comedy production and talent management company. 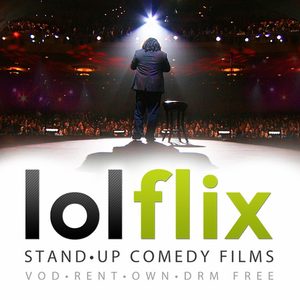 In 2010, Montoya merged technology with his career goals and founded LOL Comedy Inc., where he focused on creating original stand-up comedy films exclusively for network broadcast. From there, it was a natural evolution to LOL Comedy TV, a web-based showcase of LOL Comedy Inc.-produced comedy films.

Yet, there was something missing.

Visitors to the LOL Comedy Inc. and LOL Comedy TV sites could only get a taste of the comedic talents featured by Montoya. If they wanted to see the whole acts, they would have to catch the performer on whatever cable channel was showcasing him/her or buy a DVD. Montoya wrestled with the idea of how to bring the works of these comedians — he had on video — to a wider audience immediately and not only profit from it but share the profits with the comedians themselves.

“What LOLFlix does is allow anyone in the world to download and stream an entire, never released for download or stream, LOL Comedy original stand-up comedy show that is 30-90 minutes for $5 or less,” Montoya wrote Latina Lista in an email. “These shows can be downloaded to your computer or streamed to your smart device, DRM free. What DRM Free means is you can download it and copy it to as many devices as you own and burn your own DVDs from a single file.

“Revolutionary because this is the first catalogue of original shows (31 titles) ever being released this way (DRM Free) directly from the creators, no middleman or distributor. We financed and created these shows that have all premiered on the Showtime Network. I have directed and produced all of these shows, edited them, sound mixed them and created the artwork for all these titles. So they are truly coming directly from the content creators. There are no middleman and that is also somewhat revolutionary.”

For the $5, viewers have access to three downloads and one 30-day stream per title. Viewers can also choose to instantly stream titles for $2.99 or less. The downloadable files are available on iTunes, Quicktime and smart devices. The files are high definition 1080p, but less than 1 GB for easy download and transfer.

Montoya says that 20 more original titles are planned to be released throughout 2012 and into 2013. Yet, what is admirable about the business model is that each comedian working with LOL Comedy is considered a partner, taking a 50 percent share or more in the revenue.

Montoya sees LOLFlix as being an asset to the careers of comedians, especially ones just breaking into the business. Already featuring the work of over 100 comedians like Bill Santiago, Pauly Shore and Rick Najera, Montoya is on a mission to present more new comedians, as well as, seasoned veterans. Not to mention, he’s always on the look-out for new Latino comedic talent.

Given his experience, Montoya shared with Latina Lista his perspective on the state of Latino comedy today and what it takes to achieve success.

Latina Lista (LL): What is the state of Latino comedy today?

I think it’s bigger and better than it has ever been before. Consider this, in the last 2 years more Latino stand-up comedy shows have aired on Showtime and Comedy Central and HBO than ever in the history of television.

Some of the more obvious are George Lopez HBO and Carlos Mencia Comedy Central, but Felipe Esparza won Last Comic Standing, Alex Reymundo has had two specials on Showtime, Gabriel Iglesias has had 3 on Comedy Central and a series where he featured 20 Latino comedians. Willie Barcena had a one-hour Comedy Central and in September he has another one that will premiere on Showtime.

Steve Trevino’s first one-hour will premiere on Showtime also in September as well as a new one-hour in November from Monique Marvez. Legally Brown which was hosted by Tony Plana (Ugly Betty) and featured Alex Reymundo, Cristela Alonzo, Rick Najera as Bubba Gomez and Willie Barcena also premiered on Showtime.

So, in my opinion, the state of Latino Comedy is doing pretty good, but we can always make it better and we hope to lead that charge.

LL: Do you see Latino comics encountering more challenges than other comics?

There are stereotypes that will always exist but cultural-specific humor always runs the risk of exclusion just by the mere fact that people here in the U.S. and around the world have different cultural experiences.

The bottom line is, funny is funny and if your comedy message has a universal appeal while maintaining your cultural identity you can overcome those perceived challenges, re; Gabriel Iglesias, George Lopez, Alex Reymundo, Cheech Marin, Willie Barcena, Cristela Alonzo, Carlos Mencia, Felipe Esparza they are all funny comedians who have been able to maintain their identity while being hilarious at the same time.

So, the key to overcoming any challenge as a comic is to just be funny if being a successful comic is your goal.

LL: Are you seeing more Latina comics trying to break in?

Yes of course, there are many that have already broken in and that I have personally worked with that I feel are at the top of their game. All of them can go toe-to toe-with any comic, male or female; Monique Marvez, Kiki Melendez, Sandra Valls, Cristela Alonzo, Sara Contreras, Patty Vasquez, Sheila Rivera, Debbie Gutierrez, and yes Angela Johnson. One of my favorites who is no longer with us, God rest her soul, Marilyn Martinez was one of the greats and a true comics comic.

LL: What advice would you give an aspiring Latino/Latina comic?

Take a pen and pencil, ok maybe an iPad, or laptop, but write your own material from your own experience. The best comics in my opinion are the storytellers. If it really happened to you, it can’t be hacked. Be smart and most of all be funny.

Last but not least, and the most important advice I can give any comic is — just don’t suck!

comedy, featured, latino, stand-up
Previous Post Guest Voz: Washington on mission to bring more Latinos into Federal workforce
Next PostWorries over Latino voter turnout focuses too much on registration and not enough on what really matters

Guest Voz: Washington on mission to bring more Latinos into Federal workforce
Comment
Worries over Latino voter turnout focuses too much on registration and not enough on what really matters