Latina Lista: News from the Latinx perspective > Media > Videos > Video: Latino-Chinese teen inventor shares how everyone can be creative — if they put their minds to it! 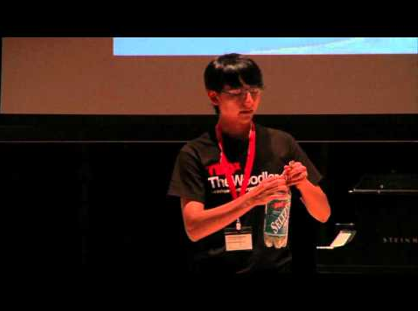 LatinaLista — Before reaching the legal age of adulthood, Javier Fernandez-Han has already accomplished more than most adults. To say this son of Chinese and Mexican parents has an active imagination is an understatement. From the age of 7, he has been an inventor. In 2008, he founded the non-profit Inventors without Borders to encourage and help teens to use their talents to solve real-world problems.

In 2009, he won first place in the Ashoka-Lemelson “Invent your World” competition for an algae and bacteria-powered system for providing food, fuel, fertilizer and sanitation for developing countries. In 2010, he won first place for renewable energy in the Conrad Foundation “Spirit of Innovation” competition for creating an affordable clean water design that uses solar, wind and geothermal-powered system for producing clean water from humid air.

Also, in 2010, Javier co-developed “Invent and Innovate“, a learning program to inspire and enable young people to use their creativity to invent products and services to serve their local communities and he launched Innovation Foundry — MIE to collaborate with My India Empowered, a NGO in Mumbai, India to rebuild a monsoon-damaged one-room school in the National Forest near Mumbai.

With all that he’s accomplished, it’s no wonder that Forbes named him to their 30 Under 30 list in 2011 or that he would be asked to address a TEDx gathering to explain that a person doesn’t have to be creative to be creative.

From someone for whom creativity should be his middle name, his talk gives everyone hope that we all can create something that can make a difference in the world.