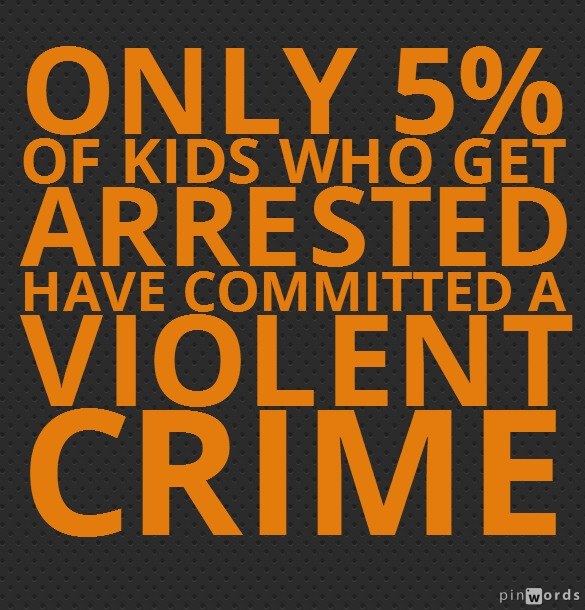 LatinaLista — There’s a saying that says “You do the crime, you do the time.” For thousands of teens and young adults who make one stupid mistake in their lives, or even a series of petty, irresponsible mistakes, they are finding themselves locked away in county jails and juvenile detention centers doing their time.

In fact, the United States incarcerates nearly five times more kids than any other nation.

But there’s another saying too that says the “punishment should fit the crime.” And what is being seen among our youth in the juvenile justice system is that the crime hardly ever justifies the punishment.

According to the FBI, only 5 percent of kids who get arrested have committed a violent crime but the other 95 percent are being treated like they did too. That means the 95 percent who didn’t murder, rob or rape someone are having to pay an excessive price for stupid mistakes and are missing out on the most important years of their lives, which are a pivotal time in shaping the kinds of adults they will be in the future.

It is said that 10,000 kids, on any given night, are held in adult jails and prisons. What they see has the potential to scar them for the rest of their lives and impact their abilities just to get their GED, get hired, or even go to college.

One organization wants to reopen a national dialogue on reforming the juvenile justice system. Mistakes Kids Make highlights the “unforgiving and outdated” policies that are criminalizing kids for stupid mistakes and which don’t provide them with any kind of second chances.

Through their campaign — website, video, Facebook — Mistakes Kids Make presents alternative approaches on dealing with youth stupidity that doesn’t entail saddling these kids with a lifelong label that will forever impact their lives in a negative way.

Mistakes Kids Make organizers agree that kids must be held accountable for their actions but the organization also believes these kids need to be provided the support services and resources to prevent them committing stupid mistakes in the future.

Before reform can be addressed, Congress needs to see that it’s an issue of concern for the public. The way to do that is to sign onto the campaign by watching the featured video and sharing it on Facebook; Signing the pledge and sharing it; and, liking the organization on Facebook and following it on Twitter.

Not all mistakes are created equal, but all kids should be treated as kids, even when their actions break the law ~ Mistakes Kids Make.

Spotlight Nonprofit: Giving homeless children more than a place to call home
Comment
It's time to take the sexism out of the debate on immigration reform