Latina Lista: News from the Latinx perspective > Media > Videos > Video: Founder of the “Drop the I-Word” campaign discusses her reaction to Associated Press’s reversal on usage of term

Video: Founder of the “Drop the I-Word” campaign discusses her reaction to Associated Press’s reversal on usage of term 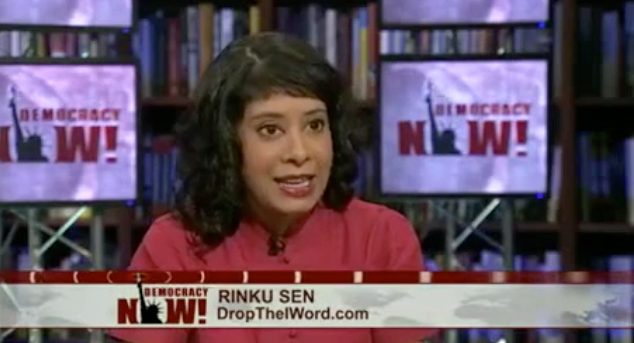 LatinaLista — Last week’s news that the Associated Press dropped the term “illegal immigrant” from its revered Stylebook caught many in the journalism industry off-guard but not the publishers of Colorlines.

The multi-ethnic news site, Colorlines.com, along with, the Applied Research Center, founded by Rinku Sen, launched the “Drop the I-Word” campaign in 2010. It targeted media — print, online and broadcast — to stop referring to the undocumented as illegal.

Over the years some prominent media listened to the reasons as to why using the AP sanctioned term was offensive and grammatically incorrect and opted to not use it anymore. Other media cited the AP’s continued usage as justification for using it in their content.

Now, even with the AP’s reversal on using the language, some big media companies are refusing to follow the AP’s lead in discontinuing usage of the term. One of the biggest media outlets to continue using the term is the New York Times.

Renewed efforts are underway to get the editors and publisher of the New York Times to change their minds but everyone knows that the journalism industry doesn’t embrace change quickly.

Rinku Sen, the founder of Colorlines and the Drop the I-Word, shared her feelings about the AP’s reversal with DemocracyNow! and what she sees as the next steps going forward to getting the term “illegal immigrant” eradicated from the media.