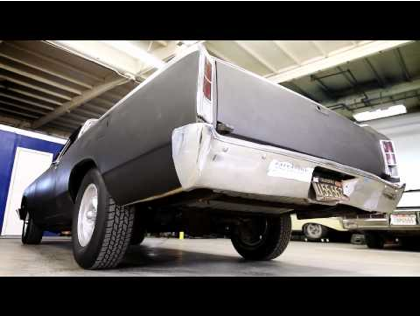 LatinaLista — Four teams, 4 cars, 4 causes — for a new series on track to rev up web-ivision. Built is the name of a new reality web series with an interesting spin and, most of all, product promotion.

Sponsored by eBay Motors, the series pits four different garages against one another in a contest to rebuild old cars that are bought only on eBay Motors, as well as, the parts needed to transform them into new vehicles. The real contest is viewers voting for their favorite transformation or garage team.

Representing Latino mechanics, is Team Lowrider led by Rico Duran of Duran’s Quality Painting in Baldwin Park, CA. So far, Team Lowrider is garnering the most votes. According to the write-up on the site:

Duran’s is big on two things: family and turning out the most beautifully painted lowriders around. In fact, Rico has a good chunk of his family tree working for him to make sure that every lowrider that rolls out of his shop is perfect…

Rico and his crew are working with a 1966 Chevy Camino. At this stage, no one knows what the final car will look like but with Latino creativity behind the design, it’s sure to stand out on a crowded highway.

featured, rebuilding cars, web-reality
Previous Post Harvard study shows states that expand Medicaid literally save the lives of their residents
Next PostGuest Voz: Voting is the only way to turn the tide of legislative bigotry and reclaim hard-fought civil rights

Harvard study shows states that expand Medicaid literally save the lives of their residents
Comment
Guest Voz: Voting is the only way to turn the tide of legislative bigotry and reclaim hard-fought civil rights