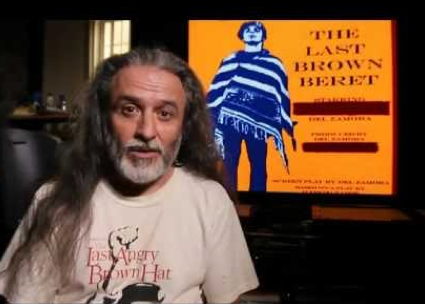 LatinaLista — Celebrating Chicano history is not complete without remembering the Brown Berets. In the 1960s, the Brown Berets, Mexican American activists, emerged as organizers in local Latino communities against police brutality and equal education. However, the FBI labeled them as militants and “a violent, subversive Mexican-American/Chicano political group.”

Their role in advancing the civil rights of Mexican-Americans and spearheading political advocacy cannot be overlooked. Yet, few plays or movies exist recounting their achievements. One popular play, The Last Angry Brown Hat, paid homage to the legacy of the Brown Berets. Though it was performed 282 times, across the country, to include 187 universities, colleges and high schools, there were still many who did not see it and have not learned about the Brown Berets.

Yet a new indie feature length film, based on The Last Angry Brown Hat is being made to bring the story of the Brown Berets to an even wider audience. The film, like the play, is based on US history and is a fictional narrative drama.

The Last Brown Beret is the story of four Ex-Brown Berets, who gather for the funeral of a fifth Brown Beret. It has been many years since these four have seen each other, a life time since they challenged thousands of students to “Blow Out” of East Los Angeles High Schools and a lot of water has passed under the bridge since they tried to take over Catalina Island. Their effort in the Chicano Moratorium March and rally against the Viet Nam War in 1970 is now just an eerie shadow. A shadow turned into a red-hot riot fueled by the aggression of L.A. County Sheriffs and the LAPD. This same riot witnessed the controversial killing of bi-lingual Chicano L.A. Times journalist Ruben Salazar at the hands of rogue Los Angeles County sheriffs.

In a garage that one of them has preserved as a shrine to the “Chicano Movimiento” and their vanguard urban revolutionary group, these four Ex-Brown Berets recount these events and revisit those halcyon days. Through flashbacks and a series of shocking admissions, heartfelt confessions and pointed accusations, we are delivered a vivid portrait of who and what the Brown Berets were and what they tried to accomplish.

The Last Brown Beret is in its final days raising funds via a Kickstarter campaign. With a goal of $12,000, the film’s creators have only until May 28 at 11 p.m. to meet their goal.