Latina Lista: News from the Latinx perspective > General > Why Obama might just deliver to Latinos in a second term

Why Obama might just deliver to Latinos in a second term

LatinaLista — In an interview with Univision’s Jorge Ramos this past weekend, President Obama clearly had a message for Latinos — he hasn’t forgotten about immigration reform. In fact, he was so on message that a question about racial tensions in the United States and the case of Treyvon Martin ended up being a response invoking the issue yet again: 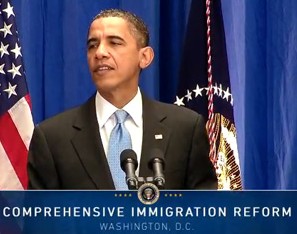 Jorge Ramos: Finally, Mr. President, why is it that half a century after the Civil Rights Movement and after the American people elected their first African American President do I have to stand today here in front of you and ask you about racial tensions in the U.S.? And of course, I’m referring to the Trayvon Martin case.

President Barack Obama: Well, I think we all understand that issues of race are deeply embedded in the history of this country. Sometimes that history has been tragic, slavery, Jim Crow, but also more recent examples of anti-immigrant sentiment, and you know, I think what I always tell people is that, you know, my election alone is not going to completely transform attitudes because this has to do with hearts and not just minds. It has to do with attitudes, not just laws…

And that’s part of the reason why issues like immigration reform are so important. We’re a nation of laws, but we’re also a nation of immigrants. We draw strength from our diversity. The fact that I can talk to you as President of the United States; you’re a major television anchor, both of us having backgrounds that 20, 30 years ago wouldn’t have existed in these positions…

In the same interview, President Obama declared that he would try and address immigration reform in his first year of his second term. To most Latinos, those words are nada más (nothing more) than a carrot-on-a-stick promise – dangling the hope of tackling immigration reform in exchange for Latino votes.

While skepticism is very high among Latino voters that Obama is 1. serious about addressing immigration reform and 2. can actually do it, a revealing interview, also done by Jorge Ramos, with Reince Priebus, chairman of the Republican National Committee, shows that the alternative could prove more disappointing than this administration’s inaction on the issue.

When asked by Ramos about how the GOP would handle the issue, Priebus answered:

— if you watch the Republican debates, you see that — you see that — well, hang on — you see that our candidates are talking about different types of immigration reform, and if you compare that to Barack Obama who promised the world and he had a super majority in the Senate; he had the majority in Congress; what has Barack Obama delivered Hispanics in this country? He has delivered nothing. All he has delivered are speeches and campaign rallies, and he has followed it up with not a single thing. At least the Republicans are debating immigration reform as a party and having an intelligent discussion as far as what that would entail, and I think that’s a good thing for our country.

There are many, both inside and outside the Latino community, who would challenge Mr. Priebus’s assertion that the GOP is discussing immigration reform in an “intelligent” way. In fact, some members of their own party have scolded their colleagues about how the immigration issue is being characterized by the party.

So, where are Latino voters supposed to put their trust?

Which side will deliver the reform that will recognize 11 million people living in the shadows? Which side will recognize that children brought to this country at a young age deserve to be allowed to contribute their talents and service in exchange for citizenship? Which side will understand that current immigration policies are doing irreparable psychological and physical damage to immigrant families?

Yet, the most important question: Which side is bound to address all of Latino voters’ concerns?

From experience, it’s seen that a first-term President wants a second term and while that administration will fight for “big” agenda issues, like health care, in a first term he’s not as anxious to take a solo stand on “controversial” issues like immigration reform.

So, it’s the second term where we find, or at least expect, presidents to make the bold stands that they promised four years earlier. They and their administrations are not only more comfortable with how Washington works but they also have a better grasp as to how to negotiate with congressional members and maneuver the political mine field. Not to mention the fact that they don’t have to worry about re-election.

Obviously, nothing is guaranteed in politics but, in this case, one thing is certain — one side has taken the first steps in addressing the criticism of its opposition about border security and did push for passage of the DREAM Act while the other side has remained content to “intelligently” discuss the issue, vote against the DREAM Act and create alternative solutions that please only party members.

Such a contrast should leave little doubt in Latino voters’ minds — and underscores the bigger question of the 2012 election season — are Latino voters ready to trust in Hope and Change again?