Latina Lista: News from the Latinx perspective > Life Issues > Environment > Why organics are still good for you

Why organics are still good for you

The history of the recent centuries has its black passages…we are adding a new chapter and a new kind of havoc – the direct killing of birds, mammals, fishes, and indeed practically every form of wildlife by chemical insecticides indiscriminately sprayed on the land. – Rachel Caron, Silent Spring

Rachel Carson’s Silent Spring chronicled the harms of pesticides on wildlife and forecasted a future where the continued overuse of pesticides would lead to ecological disaster. She concluded that we were at a fork in the road; to continue down the same path would result in epic tragedy, to choose the other path might allow us to preserve the earth. This September marks the 50th Anniversary of the publication of Silent Spring, and while some progress has been made in the way we manage “pests,” it is clear we did not choose the road less traveled. 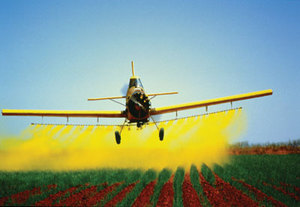 Since Silent Spring, which has been credited with launching the U.S. environmental movement and the ultimate ban of DDT, we’ve seen an increase in the production and availability of organic foods, and some innovations in the field of pest management.

However, we still use over 1 billion pounds of pesticides each year in the U.S., and the public at large remains lukewarm toward organics and largely ignorant or apathetic about the broader impacts of widespread pesticides use.

This quandary was epitomized in a recent article that poses the question: “Are Organic Foods Safer or Healthier Than Conventional Alternatives?” The authors reviewed scientific studies on pesticides and organics and determined that (1) published literature lacks strong evidence that organic foods are significantly more nutritious than non-organic foods; and (2) eating organic foods may reduce your exposure to pesticide residues and antibiotic-resistant bacteria.

Some media outlets took this article to mean that organics are “not necessarily better for you,” implying that the primary reason people choose organics is for their assumed nutritional superiority.

Others have pointed out that the article, and the conclusions some have drawn from its findings, miss the point about why consumers support organics.

The reality is that most people who buy organics do so because they recognize that exposure to pesticides can be harmful to human health and the environment. People are exposed to pesticides when they come into direct contact with contaminated products and through other exposure pathways such as groundwater contamination and spray drift.

Farmworkers that handle pesticides and affected crops are particularly at risk of significant effects. Pesticides cause impacts to species that are not the target of the pesticide, such as lobster die-offs from insecticides used to kill mosquitoes. Sadly, pesticides are a leading threat to some of our most vulnerable imperiled species, like the iconic California red-legged frog, which is in decline, in-part due to unintended exposure to pesticides.

Certainly, some pesticides have important roles to play in our society. For example, in Texas, the West Nile virus has become a pandemic, and best management practices to reduce the spread of the disease involve the use of insecticides.

However, the widespread reflexive use of pesticides comes with serious consequences. As consumers, we have some impact on how much pesticides are released into the environment. By demanding pesticides alternatives and choosing organics, we reduce our exposure to pesticides and ensure that spring will never be silent.

farms, featured, organics, pesticide
Previous Post New immigrant deportation report underscores a gov't as divided on the issue as the nation
Next PostVideo: National campaign sets goal to make 1 million dreams come true — and show people how to do it!

New immigrant deportation report underscores a gov't as divided on the issue as the nation
1 Comment
Video: National campaign sets goal to make 1 million dreams come true — and show people how to do it!